What’s next? Retiring firefighter has never lacked for adventure! 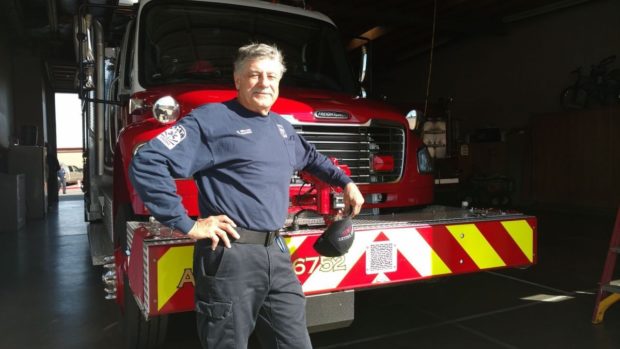 When the tones sounded late last week, Paul Miller did what he has done for the last 22 years. He dropped what he was doing, ran to a fire truck and put his gear on while listening to details of an emergency call.

What made this call different than any other was that it was the Green Valley Fire District Engineer’s last one.

Dec. 6 was Miller’s final day as a firefighter. Rather than have a party, he opted for a daylong barbecue at Station 152; a steady stream of visitors dropped in to say goodbye to one of the oldest working firefighters in Southern Arizona, if not the oldest.

Although another crew could have taken the 2 p.m. rollover call, Miller, 69, had just finished telling a reporter he was hoping for a little more excitement before he retired.

Had the call not come in, he would have ended his career helping an elderly person out of a chair.

But Miller says it’s not the adrenaline rush he is going to miss the most.

Miller came to the fire service late. He spent two years in the Marine Corps during the Vietnam war, went to college and spent several years in graphic design, advertising and marketing.

At 47, he decided he wanted a change. As a child, he’d dreamed of being a firefighter and missed the brotherhood of the Corps.

He was the oldest person in his fire academy class in 1994. He went to work for Rural/Metro and joined the Green Valley Fire District when it became a full-fledged, independent fire district in 2001. He worked his way up from firefighter to engineer about seven years ago.

Miller says now is simply the right time to leave.

“I want to retire while I’m still active. I want to travel and to do some other stuff,” he said. “I figure I’ve got another 30 years.” 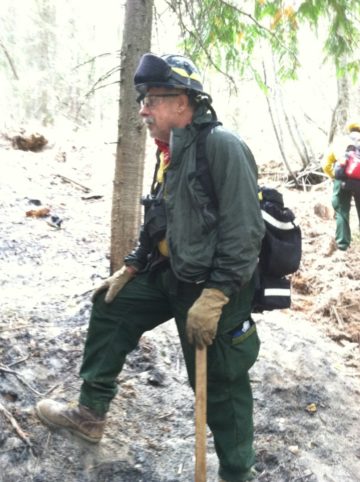 There have been many funny, touching and treacherous calls over the years, but “(I remember) holding a little old lady’s hand as she passed away because there was no one else to do it,” he said.

What isn’t he going to miss after retiring?

“Getting up at 2 o’clock, 4 o’clock, in the middle of the night, running calls and becoming a part of awkward, bad moments in someone’s life,” Miller said.

In addition to spending time with his 3-year-old grandson, Theo, in Tacoma, Wash., Miller said he and his wife, Sarah, plan to travel to Vietnam and Slovenia. He remains in touch with a South Vietnamese man he met during his tour there and he wants to touch base with a group of Slovenian firefighters who spent time in Green Valley as part of an exchange program.

Miller will also have time to hike more and restore antique vehicles, including a classic Airstream travel trailer.

Oh, and he’s also got to finish the second and third books in a series he’s writing with fellow GVFD retiree Diane Vetter.

one call sticks out most.

Their first book, “Holy Crap…We’re on Fire!” became available on Amazon.com and Kindle Books last week. It’s a fictional account of a crew of wildland firefighters loosely based on real people and events.

Vetter jokingly refers to Miller as a “freak of nature” because of his uncanny ability to pass physical agility tests younger firefighters struggle with.

GVFD Battalion Chief William Rowe recalls fighting a wildland fire with Miller when Miller was going through a terrible bout of the flu.

“He was right there with us hiking day in and day out,” Rowe said.

Miller is greatly respected within the fire service because of his dedication, calm nature, immense knowledge, and willingness to teach younger firefighters, Rowe said.

GVFD Chief Chuck Wunder said Miller has a vast amount of knowledge about hazardous materials and wildland firefighting.  However, Wunder, Rowe and Vetter said Miller is most known for his deftness with a spatula and his sense of humor. 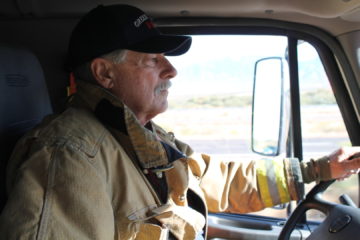 “He’s a good-natured, humorous fellow who will give you the shirt off his back,” Wunder said. “He will share his knowledge, his heart and his humor with anyone. The guy is just constantly joking.”

As Jimmy Buffett once said, “If we couldn’t laugh, we’d just all go crazy,’” Miller said.

“Humor will take you through the hardest times.”