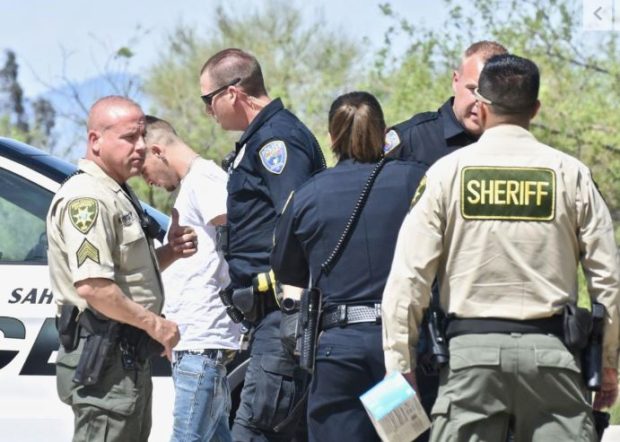 The officer was driving on North La Cañada Drive near West Duval Mine Road around 1:40 p.m. when he saw James Montes, a Sahuarita resident, walking down the road, Sgt. Michael Falquez said.

Recognizing Montes had several warrants out for his arrest, the officer stopped to confront him, but Montes fled, Falquez said.

The officer chased and tackled Montes and took him into custody after a brief struggle in which both of them were scratched up, Lt. Sam Almodova said.

Dispatchers couldn’t understand the officer when he was speaking to them during the chase, so they alerted SPD officers and Pima County Sheriff’s deputies that an officer needed immediate assistance, prompting several vehicles to respond, Almodova said.

Montes was wanted for failing to appear in court on a disorderly conduct charge and for contempt of court in cases involving marijuana, criminal trespass/domestic violence and a liquor law violation, Falquez said.