Volunteers could save lives with defibrillators 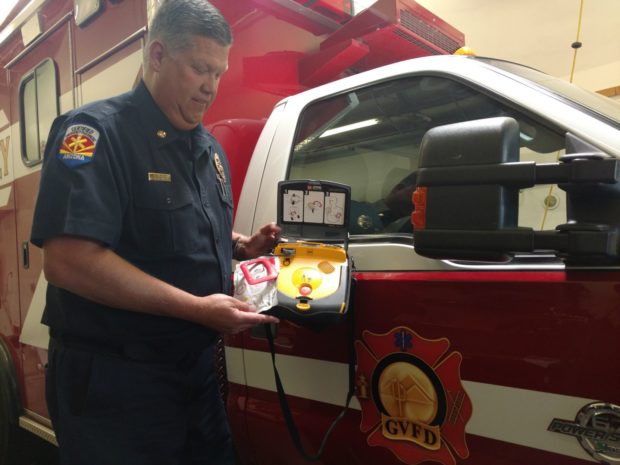 One hundred and twenty-nine seconds.

Several weeks ago, the Green Valley Fire District and the University of Arizona decided to conduct a study to see how long it would take a group of volunteers to get to the scene of a simulated cardiac arrest upon receiving a text message.

The group was told the text might come within two hours, four hours or eight hours, but it didn’t matter, they still managed to get to the scene in a little over two minutes, on average.

“What we found out was they were very quick,” said GVFD Fire Chief Chuck Wunder. “They did a very nice job of getting to the scene.”

The time trial was an important first step to see if it makes sense to distribute portable defibrillators throughout Green Valley in the hopes of saving residents experiencing a cardiac event.

Last year, the UA came to the fire district, Green Valley Recreation and the Green Valley Council with the idea of making Green Valley a “heart-safe community.”

UA professors believe more lives can be saved if community members are properly trained to use automated external defibrillators, also known as AEDs. They suspect there will be times when community members will be able to beat first responders to the scene.

Because the UA had other priorities and obligations, May’s time trial was almost a year later than originally planned, but it went well, Wunder said.

The volunteers all lived in The Springs, which was chosen because it is one of GVFD’s more isolated neighborhoods, being 3.3 miles away from Station 153, he said. It also has only one access point.

“From the fire district’s perspective, we’re excited to see how excited they are to be able to help their neighbors and that they were able to respond so quickly,” Wunder said.

The next step will be to meet with the HOA in September to see if other residents want to see AEDs distributed throughout the area and how many want to be trained, he said.

If there is additional interest, the GVFD will set up another round of time trials, this time giving volunteers as much as a week or two window of when to expect a text.

If there is widespread interest in The Springs and beyond, Wunder said further discussions will have to be had to figure out who will fund the AEDs, maintenance and training, where they’ll be located and how they’ll be protected from the elements.

Volunteers would not only be trained on using the device, but also about Good Samaritan laws and how to safely respond to scenes, he said.

The UA plans to write a report on the project which could, hypothetically, help with grant funding, Wunder said.

“I love the idea of neighbors helping neighbors,” Wunder said.

Maureen McCarthy, GVR senior recreation supervisor, said GVR has AEDs in all 13 of its centers and is happy to participate in the study.

“We recognize the fact that the earlier someone is treated, the greater the possibility they will survive a cardiac arrest,” McCarthy said.

GVR isn’t merely participating in the study, however.

Starting in September, GVR will be offering a monthly safety seminar, McCarthy said.

Once a month, GVR members and the public will be invited to attend sessions led by experts about such things as AEDs, basic first-aid, fire safety, active shooters, senior driving and depression, she said.

The “Safety Orientation Seminars” will be held at 10 a.m. on the first Thursday of every month at Santa Rita Springs. Residents will then be invited to become part of a discussion group that will be held at each of GVR’s centers within a week or two of the seminar.

GVR wants to spread the word about what resources are available to them while also increasing the number of people able to jump in and help if an emergency occurs, McCarthy said.