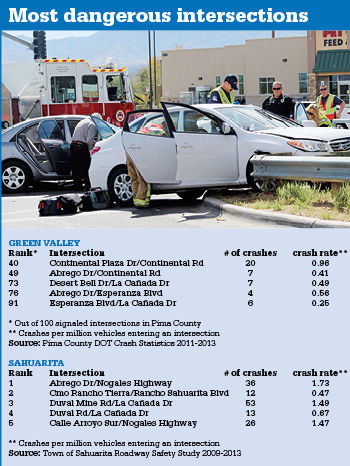 While the majority of Green Valley’s intersections are safe as-is, one of Sahuarita’s busiest crossroads is now getting the attention it needs.

Starting March 15, the town contracted with Tucson-based Psomas Inc. to study safety improvements for Abrego Drive and Nogales Highway, which has seen a decent number of vehicle crashes over the past several years. The intersection is also the entrance to a major shopping center.

The Sahuarita Police Department responded to 69 crashes at the intersection between July 2007 – the earliest data available – and April 5, 2016. The Green Valley Fire District responded to 56 crashes there between February 2005 and February 2016.
Sheila Bowen, the town’s public works director, said the intersection was pinpointed as a top priority during a five-year traffic study conducted by Psomas between 2009 and 2013. According to that study, the average crash rate for a signaled intersection in Pima County is 0.63 crashes per million vehicles entering the intersection. In the town of Sahuarita, the average crash rate is 0.97. At Abrego and Nogales Highway, it’s 1.73.

However, the severity index – a complex calculation judging an intersection based on the number of crashes, property damage, fatalities and the seriousness of injuries – is at 1.38. That is slightly above the town average of 1.3, but down from the county average of 1.42. So, while there may be more crashes, they are mostly minor, Bowen said.

That tracks with GVFD’s report that 23 of the 56 accidents it responded to are listed as having no injuries.

Psomas’ study produced a prioritized list of 12 intersections – both with and without traffic lights – in the town, placing Abrego and Nogales Highway at the top. Coming in second was Camino Rancho Tierra and Rancho Sahuarita Boulevard, with a 0.47 crash rate but a 1.42 severity index. Third was La Cañada and Duval Mine Road, which saw 17 more crashes than Abrego and Nogales Highway during the study window, but had a lower crash rate and severity index.

Bowen said some of factors influencing crash rates at Abrego Drive and Nogales Highway could be that those coming off Interstate 19 might not be expecting another traffic light so quickly as they are coming down the grade or they are still used to driving fast from the interstate.

According to the study, 16 of the 36 crashes that occurred between 2009 and 2013 were rear-end crashes and the most common cause was inattentiveness or distraction.

While that study suggested safety improvements, Psomas will now study and suggest to the town what might work best for that intersection. Whether that will be additional left turn lanes or other improvements is unknown at this point, she said.

“It’s a step further toward a design phase, but we don’t know what to design yet,” Bowen said.

In Green Valley, the current intersections aren’t seeing too many crashes, but the county still keeps tabs on potential trouble spots.

According to a three-year county crash report between January 2011 and December 2013, the most recent data available, the highest crash rate for an intersection in Green Valley was at Continental Road and Continental Plaza Drive, with 0.96 crashes per million vehicles. The next highest was the four-way stop at Continental and Whitehouse Canyon roads, with a 0.8 crash rate. Most were below the county average.

But while crash rates are generally low, severity indexes are more in line with Sahuarita and sometimes higher. For example, the intersection of Abrego Drive and Continental had a crash rate of 0.41, but a severity index rating of 2.11.

Rob Lane, county civil engineering manager for studies and data, said there is no baseline for how many crashes to expect at any given intersection. It’s dependent on a number of factors, including traffic counts and the design of the intersection, he said.

Lane said the department keeps track of crash data, ranking problematic intersections based on the number of crashes, the crash rate and their severity. The county will then generally make improvements on the top 10. County traffic engineers also keep a watchful eye on the data just in case an intersection suddenly needs some safety work, he said.

Since the latest available crash reports are two years old, they list some intersections that have already been improved. For example, last year, the county put in delineators and eliminated left turns at Calle de las Casitas and Continental Road to cut down accidents. In Sahuarita, the left-turn arrows for La Cañada and Duval Mine Road were changed from lagging to leading to help with issues there.