Study looks at training resident to use AEDs 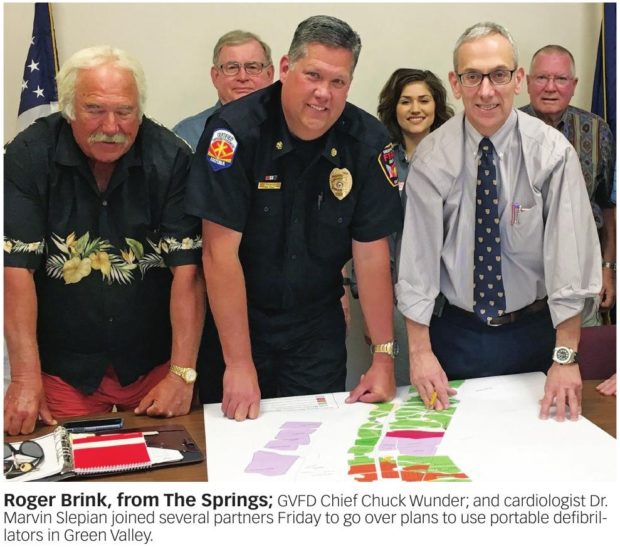 Anyone who has experienced a cardiac event or seen a loved one suffering through one knows the agony of waiting for paramedics. Two University of Arizona professors want to ease minds by changing that and making Green Valley a “heart-safe community.”

Cardiologists Dr. Marvin Slepian and Dr. Karl Kern believe every community should have an extra layer of reaction and protection when it comes to cardiac events. They would like to see more community members trained to give CPR and use portable defibrillators, which are also known as AEDs.

They also believe trained neighbors will be able to render aid at the same time, if not faster, than first responders.

To test their theory, the professors are working with Green Valley Recreation, the Green Valley Council and the Green Valley Fire District to conduct a study in Las Campanas and The Springs over the next several months. The three-phase study will involve around 20 volunteers in each neighborhood and will kick off in mid-June or early July.

During each phase, the organizations will compare response times taking into account time of day, distance from the nearest fire station, time of year and more.

Slepian and GVFD Chief Chuck Wunder stress that volunteers will not be competing with the paramedics. In fact, Wunder said his paramedics will be notified once they are enroute they are taking part in a drill. As a result, they’ll be traveling without lights and sirens.

If the study proves trained volunteers can get to scenes quicker or at the same time as first-responders, the next step would be to seek grants to purchase AEDs to place around each of the communities, Slepian said.

The end goal is about augmenting the number of people capable of providing assistance to cardiac patients.

Wunder said his department is always eager to help the community and is interested to see how the study pans out.

There are a lot of ongoing AED studies, Wunder said. For example, the University of Toronto is currently studying if AEDs delivered by drones save more lives.

Paul Williamsen has been working with all of the parties as a Las Campanas resident because he’d like to see more AEDs in the community.

“My wife works in ceramics classes at one of the GVR Centers and while another class was there, a gentleman had a heart attack,” Williamsen said. “An AED was close and he’s still alive.”

So far four people from Las Campanas have agreed to participate in the study, but they’d like to see at least 21 others, Williamsen said.

Roger Brink from The Springs said they’ve got 15 volunteers but would like to double that.

“If we have this organized and the community zoned out, I think we could cut three, four, maybe even five minutes off response times,” Brink said.

It’s Brink’s hope that if AEDs are more accessible, the more people will take an interest and become trained. He purposely sought CPR training and AED training because he spends so much time at the pool, he said.

“I’d feel pretty darn incompetent if I saw someone die right in front of me,” Brink said.