Sayre signing off after 16-year career with GVFD 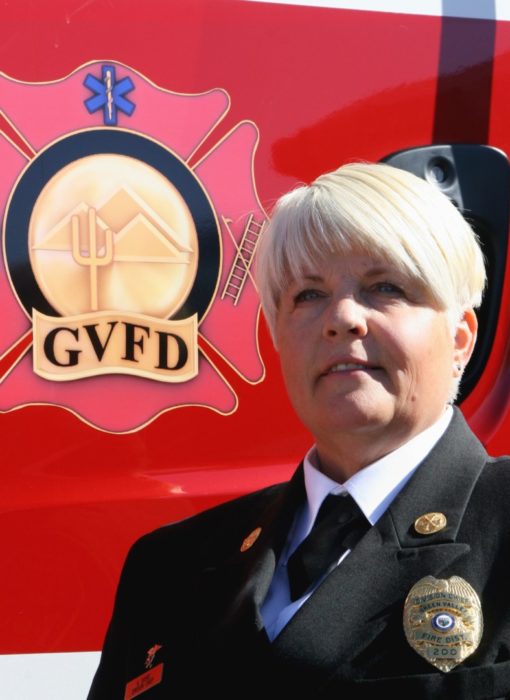 Seventy-one. When Katie Sayre walks out the door of Green Valley Fire District for the last time next week, she’ll be leaving behind 71 friends and colleagues. When she walked in the door 16 years ago, that number was two.

A lot has changed since Sayre, 60, joined the department aside from staffing levels, many of which she played a big role in. Shortly after Sayre began, the GVFD became a full-fledged, independent fire district, going from a staff of four to 44 overnight.

Sayre, who spent 18 years as a registered nurse at St. Mary’s Hospital in Tucson, was brought on by then-Chief Simon Davis to help out with the transition. She figures she probably had input into at least 80 percent of the district’s policies and procedures. She remembers the days when she was figuring out liability insurance, the state retirement system and how to put together benefit packages.

She calls it an “awesome” experience.

“It’s been flipping great,” Sayre said. “I really enjoyed it. Firefighters are fabulous people and to be a nurse and work with firefighters was a great experience.”

She will forever be grateful she was allowed the latitude to try new and innovative things, such as the nationally recognized Safety & Health in Motion (SHiM) fall-prevention program and the nurse practitioner program.

“I love to work and I like a challenge. I like to be innovative and have goals and put puzzle pieces together,” she said.

LT Pratt, GVFD’s community outreach coordinator, said Sayre has helped him transition from a 30-year career in law enforcement to the fire service over the last nine months.

“It was very apparent on my first day that Katie exemplified the fire district’s motto of serving everyone with compassion, competence and character,” Pratt said. “She has set a very high standard for me to follow in and we will miss her positive, light-hearted and caring presence.”

“Green Valley Fire District was lucky to have her,” Kosiorowski said. “Her dedication and hard work will be greatly missed.”

She’d like to be remembered as “someone who was willing to take risks with the ultimate goal of helping the public and delivering services that people need to live a better life.”

Working with her colleagues has been a privilege and the people of Green Valley are lucky to have them, she said.

“I hope they understand the dedication of the men and women who work here,” Sayre said. “They work here because they enjoy it and want to. They want to serve this population. If they want to be the cool kid and put out a lot of fires, we tell them we might not be a good fit, because we take care of people.”

Sayre plans to continue taking care of people after her retirement, albeit in a different way. She hopes to open a bed and breakfast at her parents’ former dude ranch in Tumacacori

with her husband, Ray, a retired Tucson Fire Department captain.