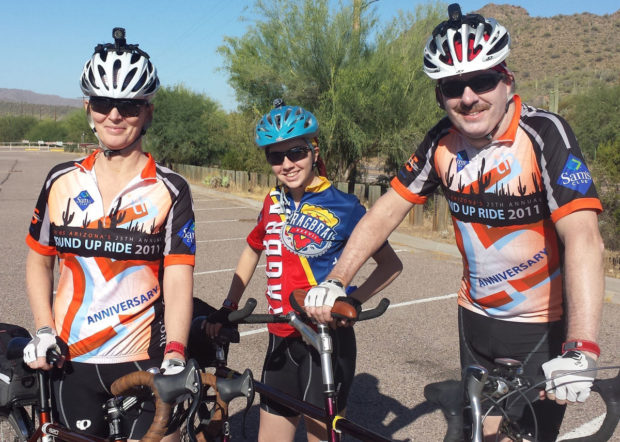 David Waechter found his calling on a cycling charity ride in the Verde Valley north of Phoenix in 2014.

Waechter, a retired engineer, was participating in the 86-mile MS150, a benefit for the National Multiple Sclerosis Society. He was with his 16-year-old daughter, Nina, and longtime family friend Lynn Hartline.

They were biking near Cornville when Waechter heard a loud bang from behind and he and Nina were thrown to the ground. They escaped serious injury but Hartline took a direct hit from a driver in a van on a gently curving country road.

The next few hours were torture. Hartline was strapped to a backboard and flown to a Flagstaff medical center. Waechter and his daughter drove the 64 miles to the hospital not knowing what to expect. When they arrived, they were given the news — Hartline wouldn’t live much longer. David and Nina were able to speak to Hartline before she passed away in his arms.

The traumatic experience, and that the driver was not charged, lit a fire within both of them.

When they returned home to Phoenix, David reached out to longtime friend Joe Mizereck, who launched a nationwide advocacy group called “3 Feet Please” in 2008. Today, Waechter leads the group.

He has updated the website (www.3feetplease.com) and developed new ways to get their message out, including selling bicycle outfits and other apparel.

Waechter will be the guest at Wednesday’s 12th annual Ride of Silence in Green Valley, an international event commemorating the lives of those who have died in cycling accidents.

This year’s ride features a record 350 locations across the country, including nine in Arizona, and 100 more events around the world. It will be the first time he has attended a Ride of Silence.

Waechter doesn’t want the focus to solely be about his organization; he wants to pay his respects just like the other riders that day.

“It’s really to commemorate everybody that’s lost somebody, and maybe make a statement,” he says. “I don’t want to do anything that takes away from the message of the Ride of Silence. So I keep those two things completely separate.”

But he hopes people will learn from Hartline’s story.

Chuck Hill, who’s organized every Green Valley ride, is glad to have distinguished figures in bicycle advocacy like Waechter attend.

“I think he grasps that we have a great event,” Hill says. “But I appreciate him coming to spread the word on advocacy and to chat about the cohabitation of vehicles and bicycles. He’s got a great message to spread.”

Hill says that other local figures, including Green Valley Fire District Community Outreach Director LT Pratt, will honored at Wednesday’s event. Hill wanted to honor Pratt, in part because of his efforts while working at the Pima County Sheriff’s Department. He was the main push behind the department’s support of the event each year, including deputy escorts and road closures to protect riders, Hill said. 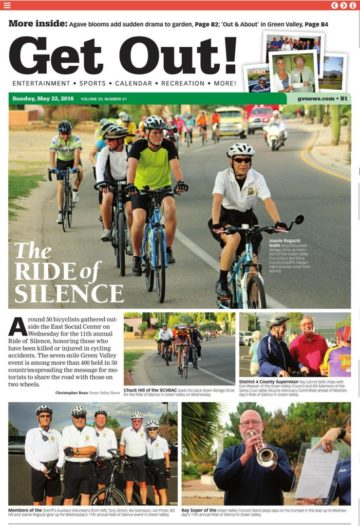 Waechter agrees the area is safer but cautioned that people always be vigilant.

“It’s really about if you see a bicyclist, remember they’re people,” Waechter says. “And especially in Green Valley, it’s a very active community. So just slow down, look and respect bicyclists. If you’re driving, remember that you’re operating a machine that could kill people, so give it the attention and respect it deserves.”