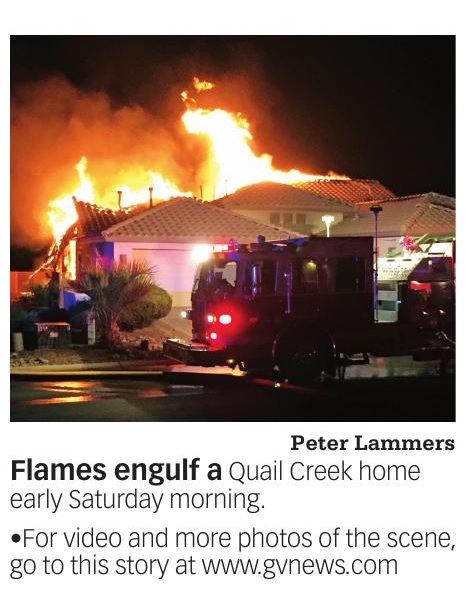 A 68-year-old Sahuarita woman died in a house fire in the early morning hours on Saturday.  Green Valley Fire District crews found a house and garage in the 1800 block of East Wintergreen Drive in the Quail Creek Community fully engulfed when they arrived just after 5 a.m..  GVFD spokesman L.T. Pratt said that fire crews had to cut their way through the metal garage door to access parts of the home.  The fire was brought under control at 6:42 a.m., Pratt said, adding , “The house was pretty much totally destroyed.”  It appears the fire may have started at least an hour prior to being reported by a neighbor seeing smoke and it likely originated in the bedroom.  It spread into the attic and spread throughout the home, Pratt said.  “The fire inspector is on scene right now and is trying to determine the actual cause, but we believe it was caused by smoking materials,” Pratt said.   The victim was the sole occupant of the home, Pratt said and neighbors confirmed.  They said the woman had lost her husband in recent years and a pet very recently.  The Green Valley News isn’t identifying the woman because next of kin had not been notified as of Saturday afternoon.  Neighbors said the woman had lived in the home about 11 years.