MONTANA VISTA: They love rural lifestyle, even with the challenges 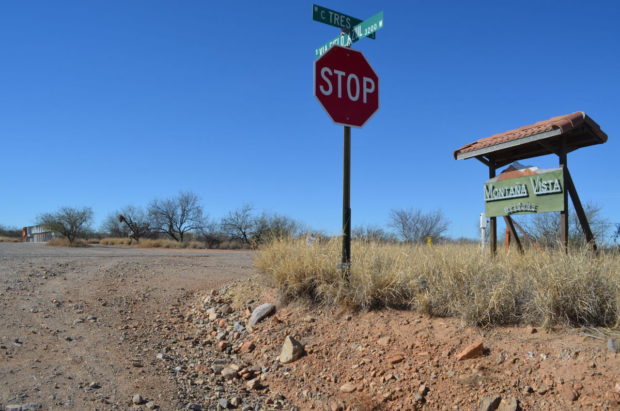 Back in the 1960s, land surveyors arrived in the Marley Ranch area southwest of Green Valley as a precursor to laying plans for commercial mining, placing markers at key points for aerial mapping.

When cowboys from the ranch encountered the markers, they lassoed them out so when the aerial surveyors took to the sky, the reference points were gone.

“They had no use for the mines,” said Anne Gatterer, laughing at the memory. Now almost 90, she has lived in the nearby Montana Vista development since 1964, and is its oldest resident.

“The Duvals were awfully nice people to deal with,” she recalls of the family that would eventually establish the mine.

Gatterer and others in the sparsely populated subdivision are convinced country life keeps them young. It reminds her of a Maryland farm she’d lived on as a child and it keeps her moving — watering plants and trees and taking care of her animals, including a horse. She lived in Phoenix and Paradise Valley, a lifestyle she calls “progress in reverse.” They can have that extra development, she said. “I can’t imagine living anywhere else.”

Her husband, Chuck, didn’t miss a day at his teaching job in Sahuarita schools in nearly 30 years. All in all, desert life’s been good.

Located on the western-most end of Calle Tres off Camino del Sol, the “unregulated development area” — also known as wildcat development and formally named Montana Vista for its 360-degree views of mountain ranges — was subdivided in 1959 into roughly 120 10-acre parcels. Since then, many have been subdivided but still range from about two acres to 10. A signed entrance and north-south drag connect eight streets — Uno through Ocho — which spread out like tentacles into the desert.

Of about 238 properties in Montana Vista, there are 190 owners, 136 occupied dwellings, and 102 vacant. Over time, several lots have been divided, some put back together. Some properties are bought and sold; some passed down through families.

At the end of 2015, there were 52 paid memberships in the voluntary property owners association.

Aside from providing lot access, the dirt roads accommodate horses, walkers, occasional grading equipment and service providers. They also lead to public lands through gates passing through private property, one of which was recently blocked by Freeport McMoRan Sierrita Mining management while the company develops a process to manage health, safety and land stewardship on land next door it bought in 2012.

Some Montana Vista residents are dismayed by the recent closure, saying access north is essentially cut off; access to the south remains open.

Access to public recreation lands was a huge attraction for Rick Dorfmeyer of Indiana, who with his wife, Lynda Campbell, bought 2.5 acres in Montana Vista in 2009. They find the area’s beauty “addicting” and love off-roading with friends and family, but consider the newly restricted access “painful” that it can’t be experienced like before.

Saturday mornings, there is a caravan of OHV (off-highway vehicles) heading up to ride — along with families, horseback riders and more, Lynda said. She said she’s “not at all surprised” that new fencing has recently been cut, apparently by vandals seeking access to land open to public use for 25 years or more. In another area, a new gate is up but not locked to a trail leading to makeshift camp sites with fire pits.

Yielding to the charms of open desert, the couple is spending more time here than before, close to an airport and good restaurants but far enough to enjoy the country, Dorfmeyer said. Already, they’ve taken to asking neighbors if they can bring them anything from town when they’re making trips.

“We’re all looking out of each other all the time,” he said.

Matt Turner, a 17-year Montana Vista resident and an off-roader, isn’t happy about the restrictions, but “It is what it is.”

Gatterer said she doesn’t blame the mining company a bit.

“They’ve been having a lot of problems with people coming back on their property,” she said.

With a fence line adjoining mine property, “I’m very grateful (Frepoort) purchased Marley Ranch (almost 2,300 acres). It should give us a buffer without further development.”

Like ’em or not — and some residents prefer their rural ambience — the rough roads are a frequent conversation topic. They inspire consternation for some; to others, they’re a nod to unconventionality, a deterrent to unwanted looky-loos.

Unlike most wildcat subdivisions, Montana Vista was a platted subdivision approved by the Pima County Board of Supervisors.

“In 1959, there were very few standards in place to ensure that property owners were purchasing improved lots,” said Carla Blackwell, county Deputy Director of Development Services.

Then, developers weren’t required to provide assurances guaranteeing construction of roads, drainage improvements and utility installation prior to lot sales. As a result, they were sold but the streets were never constructed to county standards, nor accepted into the county maintenance system, county Transportation Systems Manager Robert Young said.

In 1993, residents and Continental Elementary School District succeeded in getting Calle Tres formally established as a county road, accepted for maintenance and paved as part of the county’s dust-control program. Six years later, county supervisors formally designated other Montana Vista streets as “primitive roads.” Although the county owns the right-of-way, whatever road is there isn’t constructed to county standards nor county-maintained, Young said.

As Green Valley fixed its southern boundary at the modern-day Canoa Ranch and planned retirement neighborhoods took hold with their paved streets, amenities and HOAs, Montana Vista residents on the fringe either embraced the unencumbered simple life or decided to move on. Residents chip in to have the roads graded occasionally.

In the community’s early years, utility service was less reliable and storms still wreak havoc (someone lost a roof about 10 years ago in a microburst), but electrical service improved decades ago and has remained good, long-timers say. When occasional outages occur, TRICO addresses them quickly. While Internet service is sometimes spotty, general reception is good, Dorfmeyer said. Some properties have back-up generators and water storage tanks.

There are few complete road washouts, although summer storms can easily turn the loose gravel into mud pits. Two significant washes, Demetrie and Esperanza, cross the area. Travel can get dicey without high clearance and four-wheel drive.

It’s somewhat challenging for emergency services, but there have been no real issues, said Chief Chuck Wunder of the Green Valley Fire District, which provides service to Montana Vista properties by paid subscription because the development is outside district boundaries.

“We just go slow,” he said, adding that a new fire engine better suited to country terrain will join the district’s fleet in June.

Some properties share a well, others have their own. Property owners who drilled deep enough to begin with have less-immediate worries; in Dorfmeyer’s case, the shared well is more than 400 feet deep and the current water line at about 275 feet.

Long-term water supply is the biggest issue for Turner, who with wife, Cindy, has raised children, rode quads and established a cabinetry shop on their acreage. The water level dropped quite a bit the last 10 years, he said.

“I have plenty of water but will have to go deeper. The wells east and west of me both had to be readjusted and to lower pumps 20 to 25 feet. I haven’t had to do that with mine,” but he thinks it’s coming. To drop it another 300 feet will cost $12,000 just for the drilling, not factoring pump modifications, he estimates.

“What’s doing that is more environmental,” he said. “Unfortunately, it’s a little low, but that depends on who you talk to. Some have had to deepen wells; my own still has plenty, if I’m conservative.”

Despite some adjustments, most Montana Vista residents seem generally content.

Gatterer, who showed horses in Maryland, and Chuck settled here after moving from an old ranch bulldozed to make way for the Sahuarita mines. They’d bought 20 acres but hadn’t built the home yet. Eventually, they raised three children on their spread, had horses and chickens.

“It’s really been delightful living for a long time,” she said. “So few people have moved out here, and we were accustomed to dealing with the cowboys and the Marleys; the children go to see the branding of cattle.”

Back then, the only way to Montana Vista by car was Nogales Highway. Interstate 19 wouldn’t extend from Tucson to the Mexican border until the mid-1970s. Gatterer and neighbors took the local kids down to the highway to catch a Greyhound bus to Sunnyside school district in Tucson.

She’s covered “every square inch” of property behind Montana Vista. She’d take a dog, pack a sandwich and head back toward the tenaja (natural run-off basin).

Now the great-grandkids like to visit. Two are accomplished equestrians, another is a good horse hand.

Some live out of state; her son Greg is an engineer for Green Valley Fire District.

She ticked off the names of other long-timers: residential landscaper Ray Lopez, John Dominguez, who works in earth-moving and excavation. Terrific families, she said. Most are retired, but some still work. Another’s in regional sales, another yet, a Tucson attorney. There’s a mine employee, a woodworker, artists and more. Some work out of their homes; some in Green Valley, others outside the area.

A young couple with a baby were expected to move in this week.

Like the undulating landscape of rural Montana Vista, if you’re gonna live there, you gotta roll.

As, with storms rippling the dirt roads, the water table sinking, and immigrants crossing the land — though that has subsided over the last several years.

But despite these mostly minor annoyances, ask residents and many will say the benefits far outweigh any downside.

There’s the daytime mountain scenery and bright stars at night unfettered by city lights. Wildlife roam freely throughout the neighborhoods, and groups of residents and their visitors can be seen on one of several roads slicing through the area. They are flanked with heavy natural desert vegetation and farm fences.

Property owners have chosen the area for keeping horses and chickens; Doug and Shawna Hansen have a duck and four cats. A jackrabbit was sitting on its haunches, looking in the window to Dorfmeyer’s house just the other morning, probably the sixth he’d seen that day. Across the dirt drive, a buck sporting a full rack of antlers meandered through a neighbor’s yard.

Some of the lots have names; there’s Turners’ Timbuktu and Planet Jurs. Other residents toy with monikers (Three Dog Ranch? Skid Row Ranch?) but haven’t found the perfect one.

“What bothers me is that the parcel doesn’t belong to Montana Vista,” he said of a political campaign sign just outside the county’s right of way, apparently on federal property. In our covenants and restrictions, we have a prohibition about putting signs like that up.”

Nevertheless, the area rarely sees snow such as Van Helsland did in his native Chicago, then Maryland. After 12 moves in 20 years spanning a U.S. Army career followed by 15 years in the defense industry in Washington. D.C., he and his wife, Dikki, a well-known local artist, love not having to shovel it here.

“We moved here knowing the road was the way it was going to be,” he said. “It’s quiet, peaceful, out of the hubbub.”

Mowing’s not something Dorfmeyer said he anticipated with desert property. But he does it because brush gets pretty tall and to keep rattlesnakes at a minimum, he said.

Several say they’ll be Montana Vistans for the duration.

“We’re not leaving,” Matt Turner said. “Even if we retire, we’ll maintain the place.”

Laurie Jurs said she plans to “live here with my partner until it’s time to push up daisies.”

With the east-facing windows, the morning sun is what gets Dorfmeyer.

“With any clouds, it’s outrageously beautiful.”