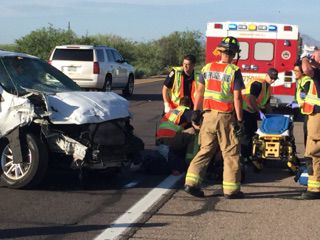 A young man who reportedly stole his mother’s vehicle in Sahuarita on Tuesday morning ended up in crash that sent him to the hospital shortly afterward, according to law enforcement.

Around 7 a.m., the vehicle, driven by the 20-year-old suspect, rear-ended a truck pulling a trailer on southbound Interstate 19 around kilometer post 60, just north of the Canoa Ranch Road exit. After striking the truck, the vehicle ran off the road, into the median and then came back onto the road, coming to a stop in the inside lane of traffic, according to Quentin Mehr, a spokesman for the Arizona Department of Public Safety.

Impairment is suspected as a cause of the collision, Mehr said. DPS is not releasing the name of the suspect as he hasn’t been cited yet.

The driver was transported from the scene to Banner-University Medical Center Tucson with non-life-threatening injuries, according to the Green Valley Fire District. There were no injuries in the truck and the people in both vehicles were wearing seat belts, the GVFD said.

The vehicle had been reported stolen to the Sahuarita Police Department an hour earlier by the suspect’s mother. Sahuarita police had searched the town for it when they learned of the crash, according to Officer Phil Steele, a department spokesman.