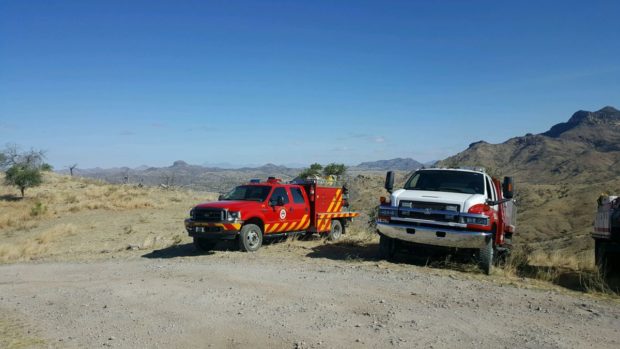 Three local firefighters and a brush truck have deployed to help tackle La Sierra Fire outside of Nogales, Arizona, which crossed over from Mexico about 2:30 p.m. Monday.

Two firefighters from Green Valley Fire District and one from Helmet Peak Volunteer Fire Department west of Sahuarita, and a GVFD fire truck were sent to the area early this morning, a GVFD spokesman said.

In all, 180 firefighters, six crews and three helicopters are battling the wildfire, which as of 5 p.m. today, involves 700 acres east of Summit Motorway and west of Walker Canyon. A much larger portion burns in Mexico, with potential to grow westward and cross onto Coronado National Forest lands at another location, a U.S. Forest Service spokeswoman said.

The fire’s perimeter remains uncontained. The fire is believed to be human caused but is of unknown origin, according to an official incident update.