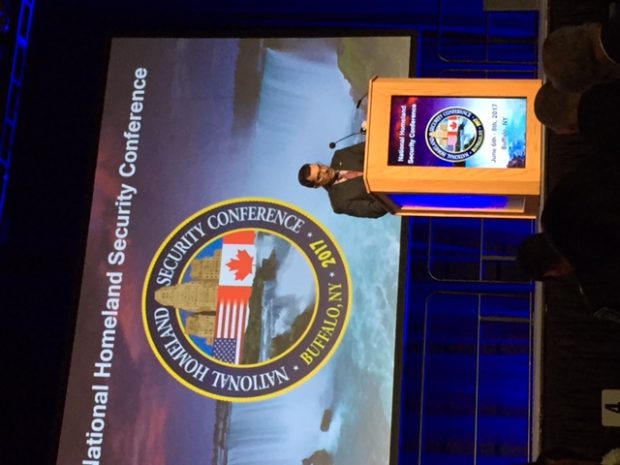 Emergency first responders in Pima County are heading in the right direction.

About 1,200 first-responders and government leaders from across the United States gathered in Buffalo, N.Y., in June to talk about counterterrorism, public health, intelligence and information sharing, community preparedness, training and public safety.

Johnson, the commander of the Green Valley sheriff’s substation, and Kosiorowski attended with representatives from the Pima County Office of Emergency Management, Sahuarita Police, Tucson Police, Marana Police and Tucson Fire Department. Costs were covered by the Arizona Department of Emergency and Military Affairs, Johnson said.

Johnson and Kosiorowski attended sessions on last year’s massacre at the Pulse nightclub in Orlando, Fla., and the July 2016 attack that resulted the deaths of five Dallas police officers.

“We learned about current trends and previous occurrences, what went right and what went wrong, so we don’t keep repeating the same mistakes over and over again,” Kosiorowski said.

Conference attendees watched unedited body cam recordings taken as officers responded to the Florida shooting, which resulted in the deaths of 49 victims, Kosiorowski said. They also listened to emergency radio transmissions of the event as they unfolded.

During the Florida incident, Johnson said attendees learned the fire department didn’t respond to the scene at the same time as the police, as they would have here. Instead, after hearing the gunfire, firefighters locked down their station about a block from the scene. Police took most of the victims to the hospital three blocks away in the back of their patrol cars and pickups, Johnson said.

On the positive side, Johnson said hospital personnel immediately sprung into action, having just had an active-shooter training recently.

Ever since the 9/11 attacks, Johnson and Kosiorowski said Pima County-based first-responders have been diligent about training together. When Jared Loughner shot 19 people in January 2011, killing six of them, Johnson said emergency protocols kicked in.

“Our policies, procedures and the terminology we use all flow together so when we respond to emergencies together, each incident is handled seamlessly,” Kosiorowski said.

Thanks to the Pima County Wireless Integrated Network, 55 public safety agencies can talk to each other by radio in real time.

“Attending that session gave me assurance that the way we’re training is the right way to train,” Johnson said. “Out West, we’re much more pro-active and into multi-agency trainings than in the East.”

“I can definitely see the importance in the future of having drones,” he said.

For examples, drones can be used to access the direction and swiftness of wildland fires, the safety of roofs during structure fires, and the circumstances surrounding a hazardous materials crisis, such as a train derailment, Kosiorowski said. They can also be used in search and rescue operations.

Johnson attended classes on terrorism and computer information, as well.

The big lesson to be learned from the terrorism class was the importance of the “See something, say something” campaign, Johnson said.

“If you look at the success we’re having in the United States — we’re having very few attacks compared to England and other countries — it’s because of our ability to use our intelligence-gathering community and people speaking out when they see something suspicious,” Johnson said.

Johnson and Kosiorowski both said they appreciated the opportunity to attend the conference because of the chance to network.

“By meeting others in our field, we get to bounce ideas off of each other and by putting more than one head together, you can come up with new and innovative ideas,” Johnson said.