The Green Valley Fire District rescued an 81-year-old Green Valley man from the roof of his home Wednesday morning after he tripped, fell and broke his hip.

GVFD spokesman L.T. Pratt said the man, a resident of the 900 block of West Camino Asturias, tripped while watching workers repair his air conditioner around 9:20 a.m.

“Firefighters had to reach the patient, stabilize and then bring him off the structure without further injuring the man,” Pratt said. “Once off the roof, the man was transported to the hospital to treat his hip.” 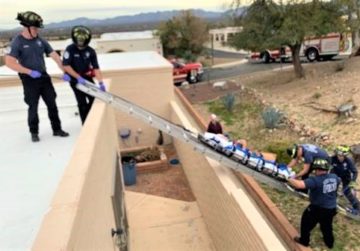