The Green Valley Fire District might not be as quick to offer its services to fight out-of-state wildfires this year because it’s still waiting on federal reimbursements from last year’s fires.

GVFD sent firefighters to Oregon, California and Montana in 2017 to fight wildland fires and has yet to receive $108,000 it’s owed, Operations Chief Joey Kosiorowski said.

The State of Arizona created a $10 million account in 2016 to pay local fire agencies that respond to fires on federal lands. The state then asks for reimbursement from the federal government.

But Arizona has paid out the entire $10 million and owes local fire agencies another $3.2 million; the federal government has yet to reimburse the state anything.

Gov. Doug Ducey sent a letter to the U.S. Departments of Agriculture and Interior on Tuesday asking for their “attention and prompt action.”

Daniel Ruiz, a spokesman with Ducey’s office, said Friday they’ve yet to receive a response to the letter.

Forty-three percent of what is owed to the GVFD stems from an October 2017 fire in California, Kosiorowski said. The district submitted its bill in December.

The remaining $62,000 due the GVFD stems from wildland fires on federal land within Arizona, he said. 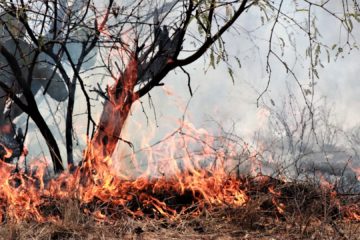 By law, Arizona is required to pay fire agencies within 30 days of receiving a bill when the fires occur on state land, but there is no such requirement when it happens on federal land, Kosiorowski said.

“Due to the last four years of sound financial planning and decision-making, we’re able to carry the load better than some departments,” he said. “One hundred and eight thousand dollars would kill some departments and really hurt others. It’s moderately impacting us.”

There are talks about increasing the firefighting fund to $25 million, but that doesn’t solve the problem of slow or non-reimbursements from the federal government, he said.

This year’s wildland fire season in Arizona has been mild compared to last year, Kosiorowski said.

“We’re not in the clear until we get hours of good rain, though,” he said.

As the rainy season builds up, there’s an increased likelihood of lightning-sparked fires, Kosiorowski said.

While there are no trees left in the 47,000 acres scorched in the Sawmill Fire in April 2017, all of the grass has grown back, he said.

“It’s a very low amount, but for a district of our size it is a burden,” Austin said. “I’m not like Green Valley or some of the other fire districts.”

Arivaca has 40 volunteer firefighters and a $188,000 budget, he said. The volunteers are paid every 10 days.

While his board prohibits him from fighting wildland fires out of state, “If I could go to California I would kind of hesitate,” he said.

Tubac Fire District is waiting on a $36,000 reimbursement from an October fire in California, said Nancy Lindsey, office administrator. She said they feel fortunate because they’ve been paid for all but one of the fires.

The district sent its firefighters to California 14 times, to Oregon five times and to Texas once. They also fought federal wildland fires in Arizona five times.

“A lot of the smaller districts have told me they’re not sending their firefighters out of state anymore because they just can’t afford to,” Lindsey said.

Prior to the state setting up the $10 million fund, Lindsey recalled it sometimes taking up to a year to be reimbursed.

Corona de Tucson Fire District Chief Simon Davis said that as of six weeks ago, his district has been paid up. They received their final reimbursement for a fire that was fought in August.

At one point, Davis said the district was owed $300,000, the equivalent of his entire cash reserve fund.

He would have been in a “pinch” had it been any higher, especially if it was at a time when there was no tax revenue coming in, he said. His 20 firefighters are paid every two weeks.

“It’s definitely an issue for smaller departments who have to float that much money,” Davis said.

Bill Boyd, public affairs and legislative officer for the Arizona Department of Forestry and Fire Management, didn’t immediately know know much his agency is owed but was pleased the governor sent the letter.

“We appreciate the governor’s efforts to continue to work with our federal partners to get the bills paid,” Boyd said. “It’s nice when the governor notices and goes to bat for us.”

Boyd attributes the slow reimbursement process to the continued drought.

Davis said increasing the $10 million fund “would be a good start.”

Fighting wildland fires is a good source of extra revenue for fire districts, assuming they get reimbursed in a timely manner and the federal government is fortunate to have a “standing force” of reliable firefighters ready to go when fires break out, he said.

Last year, the GVFD billed more than $500,000 for wildland firefighting efforts and went on more than three dozen fires.