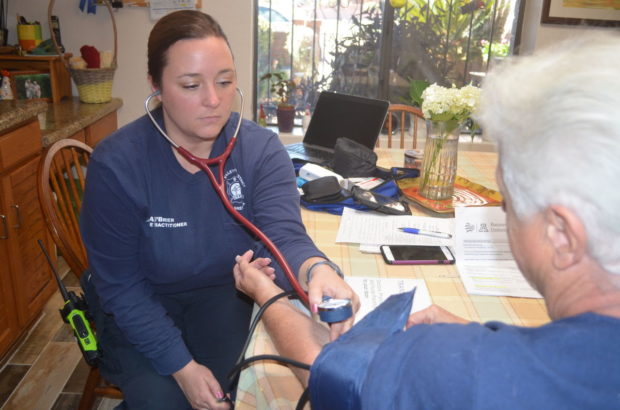 After restocking her SUV with supplies and wrapping up some paperwork, Adrianne O’Brien was just about ready for her day to begin. She was on her way to gas up when she got her first call.

The woman on the other end of the line was concerned. Her husband was recently diagnosed with bronchitis but his antibiotics just weren’t doing the trick. His cough seemed to be worsening. Could O’Brien stop by to check on him?

Sure, O’Brien said, just give her 20 minutes.

Fifteen minutes later, O’Brien’s cell phone rings again. It’s an assisted living employee concerned about a female patient who woke up confused and hallucinating. Concerned about the possibility of a stroke or sepsis, O’Brien urged the caller to dial 911 and continued on her way to the Quail Creek bronchitis patient. An hour later, the 84-year-old man had two new prescriptions and a relieved wife.

O’Brien is Green Valley Fire District’s family nurse practitioner, and her day is as unpredictable as it is satisfying.

Since March 2015, local residents have been able to make weekday appointments with a nurse practitioner for non-emergency medical conditions that might otherwise send them to the hospital. The program helps avoid costly emergency room trips, saves on expenses for the fire district, and takes Medicare, AHCCCS and most insurance plans to help patients pay charges for the on-site visit.

“I usually start my day out with one appointment and then it adds up quick,” she said.

Most of her patients are at least 80. Falls, cardiac events, upper respiratory infections and urinary tract infections are the most common calls, O’Brien said. She’ll also suture lacerations and stabilize broken bones until patients can see a physician.

The bronchitis patient’s wife made the right decision, O’Brien said.

“He had a high fever he wasn’t aware of and his condition could’ve gotten worse,” she said. “He could have ended up in the hospital.”

She hopes the program will expand to weekend and evening hours. Right now, she’s available Monday through Friday, 8 a.m. until 4 p.m.

“My patients are real appreciative to not have to leave their home and sit and wait in a facility where there are other people who are sick,” O’Brien said. “Most of my patients call the day of, but the longest they’ll have to wait for help is a day, unless it’s a weekend.”

Immediately following the bronchitis patient, O’Brien heads over to Canoa Hills for a pre-arranged appointment.

Since January, O’Brien has been conducting follow-up visits on recently discharged hospital patients as part of a GVFD contract with Evolution Health. The idea is to make sure patients don’t end up back in the hospital.

Two weeks ago, Wilson underwent vascular surgery and she tells O’Brien she’s doing great. Over the next 45 minutes, O’Brien chats with Wilson about her medical history, takes her vitals and asks her questions about numbness, tingling, headaches, fatigue and headaches.

Wilson, who moved to Green Valley in 1995, had read about the nurse practitioner program in the Green Valley News.

“I think it’s a great program. I think a lot of our neighbors could use it,” she said. “A lot of people close to us have gone through a lot of different things. Maybe I can send you some business.”

After making sure Wilson had no questions, O’Brien wishes her a good day.

“I think at least half of my patients are knowledgeable about their health history, their medications and what they’re for, but the rest maybe aren’t interested or their cognitive abilities aren’t there,” O’Brien said.

O’Brien doesn’t just see to people’s medical problems, however. She often finds herself commiserating with them over insurance woes, offering support and guidance to caregivers who are facing end-of-life decisions, and just lending a sympathetic ear.

“Being a friend and trying to coordinate social services for them is at least half of it,” O’Brien said. “I see a lot of people who know they are lonely and isolated, but they don’t want to do functions. They are really appreciative of people who will come to them.”

In O’Brien also carries a list of providers for everything from hospice care, home health care, and social service agencies, such as Valley Assistance Services.

She recalls going to a patient’s home following his discharge from the hospital to find that the man, who was no longer able to drive, had no groceries and no one to look after him. She took care of that.

Working for the fire district is fulfilling on many levels, she said.

“I like being out and about. I had a hard time when I worked in a clinic just going room to room and sitting at a computer in between times,” O’Brien said.

She also likes the unpredictability of her days, having worked as a lifeguard and an emergency room nurse. Every patient and every day is different, she said.

O’Brien recalls two fall patients. One had multiple serious health issues, was basically bed-ridden after the fall and had no support system. The other had no other health issues, could move around somewhat and had help at home.

She urged the first patient to go to the hospital; she urged the second to see an orthopedic doctor.

Sometimes, she’ll arrive only to discover there’s nothing she can do aside from offering advice, as is sometimes the case with cancer patients.

It’s not an easy job by any stretch, O’Brien said.

“If my stress gets built up or I have a rough call, day or patient, I usually have my husband or my mom, who is also a nurse practitioner, to bounce things off of,” O’Brien said. “Plus, my kids help too.”

After a quick tuna salad lunch, O’Brien is off to see about a confused man and, later, a patient who suspected he had strep throat.