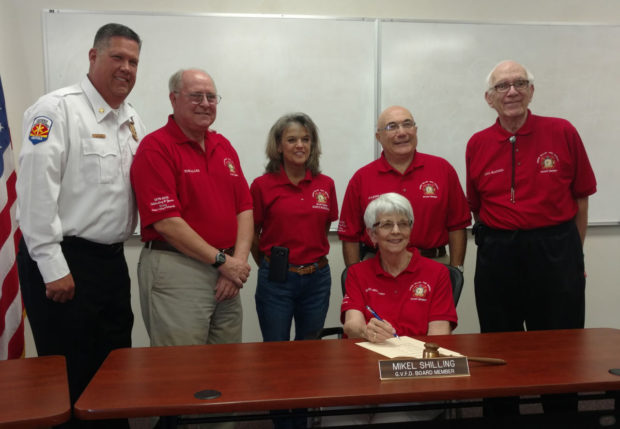 The fire district’s budget would increase from $9.4 million to just under $10.8 million.

Wunder said the district has to come up with just under $600,000 because of the restructuring of the state’s public safety pension system. Voters approved Proposition 124 and the state Senate passed SB 1428 last year to get the financially troubled system back on track. Ultimately, GVFD will be required to contribute just over 11 percent more per year starting in Fiscal Year 2017-18.

The board also has preliminarily agreed to set aside $200,000 for a capital replacement fund. Wunder said it has been difficult to set up a replacement program since about 2008, when the economy started tanking.

“This has forced us to purchase capital items with loans and pay interest on these loans,” he said. “The district would prefer to have a replacement program in place that allows us to pay for capital items with cash and avoid interest payments as much as possible.”

While the fund would primarily be used to replace firetrucks and other apparatus, it could also be used for station maintenance and repairs, Wunder said.

While the tax levy will take care of a large portion of the budget increase, Wunder said a significant portion will also be covered by the district’s new ambulance service.

“The district is very close to working out a deal with AMR where both GVFD and AMR will provide ambulance transport in the Green Valley Fire District,” Wunder said. AMR, formerly Southwest Ambulance, is owned by Rural/Metro Fire.

Once the deal is completed, hopefully within the next six months, GVFD would station an ambulance at Station 151 at 250 N. La Cañada Drive, Wunder said.

Once a call came in, the closest unit — whether GVFD or AMR — would respond.

Although the cost to the patient would remain the same regardless of who responds, Wunder anticipates the ambulance transportation revenue would add just over $500,000

to the district’s coffers.

GVFD’s staff will increase by five when the ambulance deal is worked out, Wunder said.

A public meeting on the budget will be held June 28 at 9 a.m. at GVFD Headquarters, 1285 W. Camino Encanto.