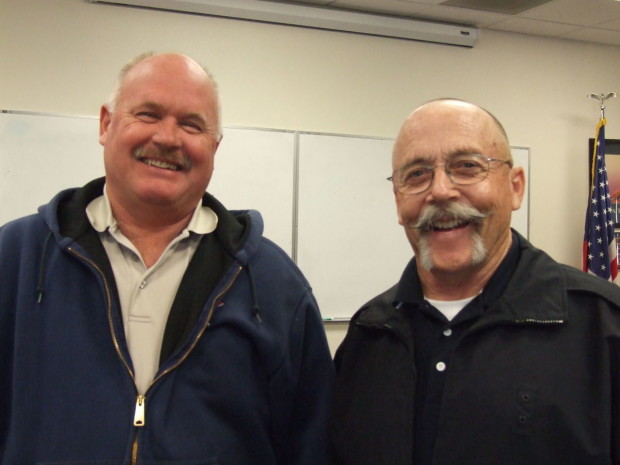 Two new staff members have joined the Green Valley Fire District, although both have roots in the area dating back years.

Thompson spent 10 years performing fire and electrical safety inspections of large manufacturing plants in Sonora, Mexico, and has been a certified EMT since 1984. He also provided inspection services for the Tucson Fire Department, was certified on its Hazardous Materials Team, in technical rescue, and knows his way around the workings of large vehicles, heavy equipment and related safety practices.

There’s little he can’t do, said GVFD’s Community Services Chief Katie Sayre, whose husband, Ray, the Santa Cruz County’s Emergency Management director, was a TFD captain when Thompson served as an engineer there. With his background working with large equipment, he also trained the GVFD crew to use its ladder truck, and also is an experienced welder and electrician.

In addition to his most recent job as a welder/mechanic at Caterpillar, he’s also worked at the Duval-Sierrita Mine.

As a safety guy, he said he wants people’s businesses to thrive and is happy to see that most local residents are “very fire-conscious.”

“After a catastrophic fire, many businesses don’t reopen,” he said. “There’s no 200-year-old buildings here” to worry about, he added. At his job in Mexico, he inspected nine large plants employing 2,200 workers, some of which didn’t have a legal exit in the building, as many doors opened inward — a virtual death sentence in a bad fire.

On visits to rural Mexico, he’s seen homes without electricity, running water or potable water. As the communities grow, eventually they get those services, but are used to living without them until the time comes.

Thompson counts himself fortunate in many ways. His skills have helped build houses across the border, share tools, and allowed him to travel extensively and converse with the locals.

Born in Douglas, Thompson says he should have been born in Mexico. He came to love the country early on, speaks Spanish and spends as much time across the border as possible, making new friends on every trip. He’s even pinpointed his final resting place in the Pinacate Peaks, a formation of volcanic mountains and cinder cones about 30 miles north of Rocky Point, he said.

In his numerous cross-border trips, he’s met strangers who’ve steered him in different directions than he would’ve gone, he said, recalling one of his many visits to Copper Canyon in the Mexican state of Chihuahua. Invited to travel through the home town of an acquaintance he made en route, he discovered beautiful Mennonite farms, extensive agricultural business and 20 to 30 acres of net-protected fruit orchards from which the popular Jumex juices are made.

“I never would have known about it if I hadn’t met the man,” Thompson said.

He enjoys “just driving” on backroads, dirt roads, sometimes where there’s no tracks, and taking friends on tours of Mexico. He learned the language listening to Spanish radio and speaking Spanish with friends.

Thompson is also a family man; five of his six kids and 18 grandchildren live in Sahuarita. A daughter and three more grandkids live in Texas. Two of his sons work for TFD.

In his new job, he said he relishes meeting the business community in Green Valley and the district’s portion of Sahuarita, which extends north to Camino Antigua.

Stiegleiter is working part-time with GVFD on a trial basis so officials can determine if sharing him with another district is a good fit. His duties include inspecting construction sites to ensure projects meet building-code requirements.

Originally from the Chicago suburb of Aurora, Stiegleiter has also served in Arizona with Elephant Head Volunteer Fire Department, Northwest (Tucson) and Nogales fire districts; with a trucking company, McDonnell Douglas and UPS. His dad and uncle were firefighters, and he has cousins in the fire service.