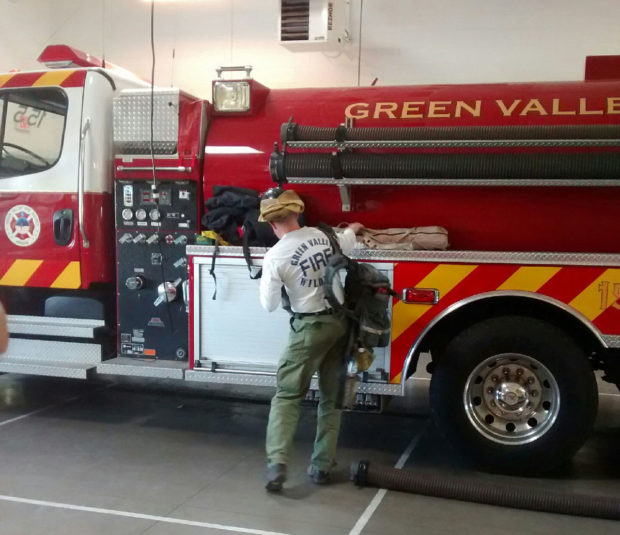 Green Valley Fire District personnel joined about 60 personnel battling the Montrose Fire in the Santa Catalina Mountains north of Tucson through the day.

Three firefighters and two water trucks were deployed shortly after 7 a.m., according to GVFD. Flames were spotted at roughly 5 a.m. roughly three miles northwest of Rose Canyon Lake on Mount Lemmon, according to a U.S. Forest Service spokeswoman.

As of shortly before 5 p.m., the fire was considered under control, said a spokeswoman for Pima County Sheriff’s Department Community Resources Unit. Earlier, an estimated five acres of timber, brush, grass and fallen trees were involved along steep, rough terrain, with growth potential “high,” the USFS said.
Helicopters will continue until 7 p.m., and hotshot crews will continue on duty through the night. Rose Canyon, closed while helicopters were dipping water from the lake, will reopen for fishing tomorrow.

Six water trucks also helped snuff the blaze hauling water from the base of the mountain up Catalina Highway.

Temporary flight restriction from the FAA is in effect over the affected area; any drone or other aircraft in the vicinity may hamper firefighting operations until airspace is cleared, the USFS noted.

Officials believe the fire is human caused, and it is under investigation