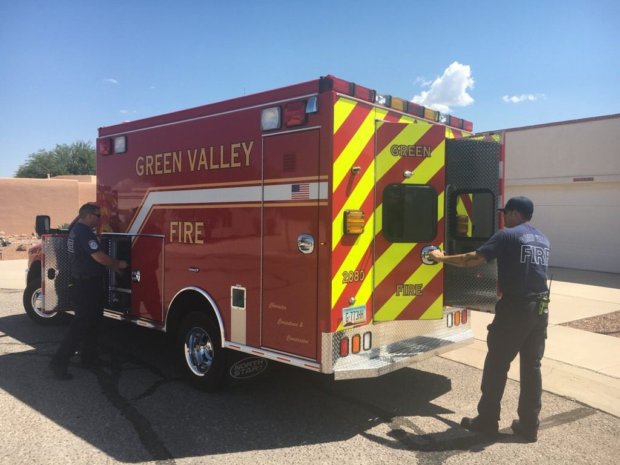 More than 300 patients have been taken to area hospitals since the Green Valley Fire District got into the ambulance business late last year.

The fire district and AMR reached a deal in April allowing both to provide services within the fire district, which includes Green Valley and the southern part of Sahuarita. The Arizona Department of Health Services approved an Advanced and Basic Life Support Certificate of Necessity in September. AMR, formerly Southwest Ambulance, is owned by Rural Metro.

Since Nov. 20, people living in the Green Valley/Sahuarita area have been taking rides to the hospital in either a GVFD or AMR ambulance, depending on which is closer. 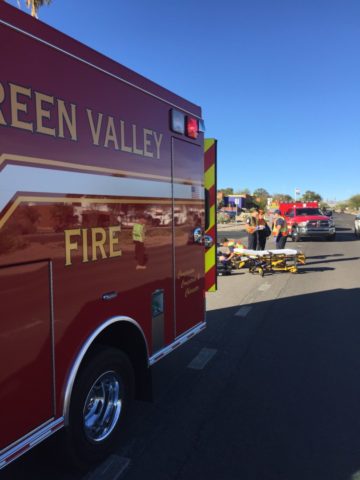 Ambulances staffed by GVFD are responding to emergency calls from Station 151 at 250 N. La Cañada Drive and Station 153 at 210 Continental Road.

GVFD Operations Chief Joey Kosiorowski said he doesn’t believe most people realize the change, but those who do know they are in a GVFD ambulance have provided positive feedback.

“Things are going well,” Kosiorowski said. “No unexpected issues have arisen, and the crews are enjoying being able to continue patient care until arriving at the hospital.”

Between Nov. 20 and Jan. 21, 155 patients were taken to Green Valley Hospital and 89 were taken to St. Mary’s Hospital in Tucson. Most of the remaining requested they be taken to University Medical Center South, UMC Main or Southern Arizona Veterans Administration Health Care System.

The district purchased a surplus ambulance from the Drexel Heights Fire Department for $8,500 and it’s been placed on reserve status.

GVFD Chief Chuck Wunder has said the fire district and AMR will charge the same rates, Wunder said. He has also said he anticipates the ambulance transportation revenue will add just over $500,000 annually to the district’s coffers.