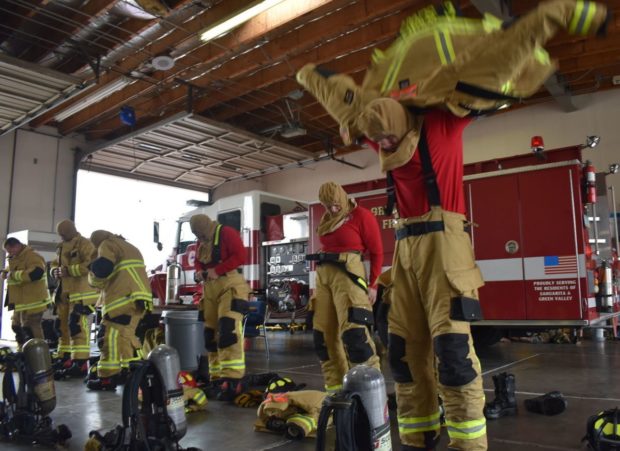 Thursday was a big day at Green Valley Fire District’s Station 152. The district’s new recruits put aside their books to practice putting on their new gear.

If that doesn’t sound exciting to you, imagine this — your house is on fire, and a firefighter’s ability to put on gear quickly could be the difference between losing everything or saving it.

The fire district is training nine new firefighters, eight for GVFD and one for Drexel Heights. The district started its own ambulance service in November and needed additional personnel to replace those assigned to the ambulance and two others who have retired or moved on, Scheller said.

The newbies will work four, 10-hour shifts during the duration of the academy, with half of their time spent on academics and the remainder going through drills involving gear, hoses, knots, tools and ladders.

All nine recruits worked hard to get to this point, Scheller said. Each is already an EMT or paramedic, and have Firefighter I or Firefighter II certificates from the state.

What’s especially noteworthy about this class is that it includes four women. If they graduate March 30, the number of women within GVFD’s ranks will more than double, Scheller said.

The fire service is no longer just a profession for men, he said.

Courtney Lopez, 32, Heather Thomas, 36, and Hannah Chester, 31, said they have long dreamed of being firefighters and have found GVFD to be nothing but encouraging.

Chester was 2 years old and living in San Francisco when a magnitude 6.9 earthquake killed 67 people.

“I don’t remember much, but it was dark and someone at my daycare got hurt,” she said. “I just remember the fire department coming in and they brought light and safety, and from that moment on I knew I wanted to be a firefighter.”

There weren’t a lot of women firefighters when she became an adult, Chester said, so she didn’t go right into the profession. At different points she’s studied environmental economics, business, equine science, agri-business and environmental science. She’s also been a bartender and competitive bodybuilder.

She finally decided to pursue her dream and achieved her firefighting certificate late last year.

She accepted GVFD’s job offer because of the importance they place on customer service and compassion, she said.

“Of the many things they thought were important, those two really spoke to me,” Chester said. “It just felt right from moment one.”

Lopez has been a paramedic for three years and is convinced women are fully capable of doing the job as well as the men, but says they bring a different dynamic to the table.

“I’m not saying men can’t be sensitive, but there’s something a little bit more comforting about a woman being on a scene,” Lopez said. “I have noticed being on scene…that children and women gravitate toward me. They’re more comfortable sharing stuff with me sometimes than they would with the men in the service, so we definitely play a vital role in the fire service.”

The mother of three and former personal trainer said her mother grew up in a time when women could pursue two careers, nursing or teaching, so being able to pursue a career in the fire service was “huge” for her.

“I want her to know that she is capable of doing absolutely anything that she wants to do regardless of whether it be a female-dominated field or a male-dominated field,” she said. “She’s my driving force. When I wake up in the morning I can’t quit because of my daughter. Children are not going to learn by what we tell them, but by what you show them.”

Thomas, a mother of two, grew up in a military family that is full of strong female role models. She wanted to continue the tradition for her 7-year-old daughter.

“I want her to know there isn’t anything in this world that she cannot do. All she’s got to do is be willing to put in the hard work to get it. Nothing except for herself is going to stop her,” she said.

Thomas, who has been an EMT for 10 years, said the road she’s chosen has been a tough one, but she’s determined to buy a house for her children upon her graduation. They’re excited about having rooms of their own, she said.

“It’s been very challenging in every way possible — mentally, emotionally, physically,” Thomas said. “We get up at the crack of dawn, when it’s dark, and we go to bed way after its dark. And so much happens in between those two times.”