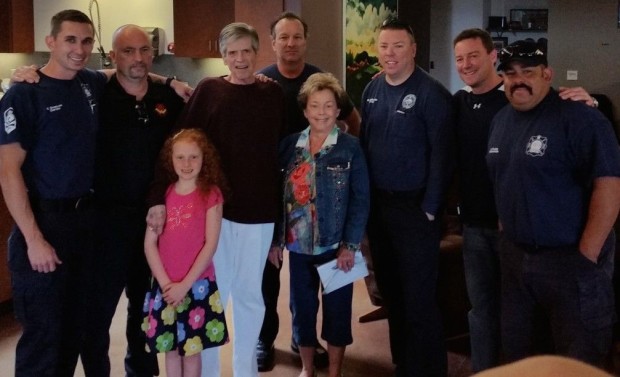 A Green Valley woman has her high school gym teacher to thank for skills that helped saved a Sahuarita man’s life when she sprang into action at a local hardware store.

Jennifer Benedict, who does business almost daily at the Ace store in Green Valley Village, said she paused barely a second when she saw a fellow customer on the floor turning purple, before she knelt down and started chest compressions.

“I thought he was dead,” she told the Green Valley Fire District board at its meeting Wednesday, where she and others were recognized for their heroism on Feb. 24.
She continued CPR for a minute or so before the man started responding. A store manager administered mouth-to-mouth resuscitation as Benedict kept up the compressions.

“Someone screamed, ‘Call 911,’” recalled Marie McAuliffe, who co-owns the store with her husband, Mike, and was in the office at the time. Thinking someone tripped and fell, she peeked out, saw the man on the floor and dialed.

“We thought he was gone because of his color,” she said.

Suddenly, the patient gasped for breath, and the order repeated itself several times, with Benedict still compressing and the man periodically gulping for air, Marie said. Helping with the resuscitation was Marie’s father-in-law, who also goes by Mike, one of several managers at the store.

It was three or four minutes before paramedics arrived from Fire Station 151 nearby on La Cañada Drive.

“She seemed calm, cool and collected, she wasn’t all over the place,” he said. An ambulance arrived a moment later.

Benedict realized the compression efforts were working when the man’s color went from “eggplant to more normal,” she said.

The patient, Stephen Hill, 72, of Quail Creek, learned later he was clinically dead for 25 minutes that day, he told the Green Valley News. He and his wife, Nancy, moved to Green Valley from Germany 14 years ago, where he worked for Motorola.

In Green Valley, he was discharged from the hospital March 2 then spent two weeks in rehab. His first time back in public involved a firehouse visit to thank the emergency crew Tuesday. Family accompanied him including son Anthony, visiting from overseas.

His therapy makes the time go quickly and tires him some, “but it’s good to be among the living,” Hill said Thursday. He was unable to attend Wednesday’s recognition due to a doctor appointment..

Hearing about the 25 minutes he was “dead” got him thinking.

“It makes you wonder that if someone can save you when you’re that far gone, how many have died needlessly when others may have stopped (CPR) sooner,” Hill said.

“Those are wonderful people at that hardware store. It was like all the pieces just came together. The timing couldn’t have been better if it was planned. I’m glad it worked out — I’m a happy boy.”

Until the cardiac event, he’d been working part-time at Quail Creek’s fitness center and plans to return to the job, but not for a while. He’s still recuperating, and has another, unrelated health issue to tackle, then figures he’ll be good to go.

On that day in the store, staff was “shellshocked” as the ambulance pulled away, not knowing whether he’d survive, Marie said. It’d be days yet before Benedict and store workers got word.

Hill had come to the hardware store by himself, seeking an item from the lighting department. Marie’s father-in-law said Hill looked fine when he led him to that aisle.

Then Hill reached for an item and fell flat, Marie said. Out cold and unable to communicate, Hill couldn’t relay his health history, which includes a triple bypass and gall stones in his pancreas.

All in the past, his wife, Nancy, said.

A few days after Hill entered the hospital, the fire chief came to tell the store staff the man had survived, Marie said. Relief flooded over them. Later, Hill’s wife and family visited the store to hug the staff.

“They are a lovable family,” Marie said. That’s when Nancy mentioned Stephen had had open-heart surgery at age 44. “His aorta is a garden hose,” she said.

At Wednesday’s community recognition, Benedict said she’s wondered whether she’d ever employ the CPR drills her gym teacher had hammered home back in 1980.

Without the quick thinking and perseverance of her and others, there’s a good chance Hill’s outcome wouldn’t have been as favorable, Scheller said.

“It’s so important to start CPR early,” he said. “As long as you’re moving blood, there’s a chance.”

Some of the store staff had already signed up to get CPR-certified, Marie said. The public can schedule such training through GVFD’s Community Services Division by calling 625-9438. For details, go to gvfire.org/cpr

Hill’s wife Nancy calls all his near-brushes with death miracles.

“I just don’t think God’s ready to let him go.”