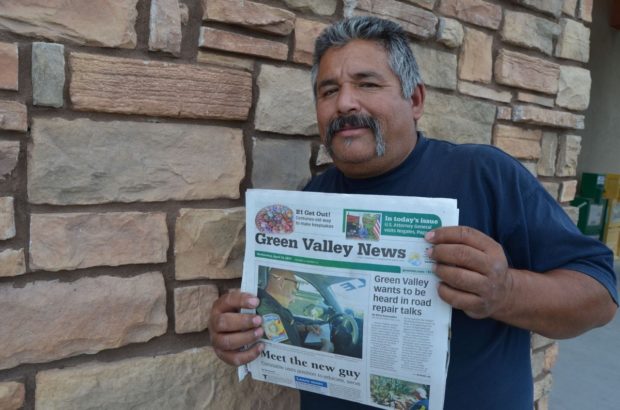 Juan Alvarez is used to delivering the news, not making it.

But the longtime carrier for the Green Valley News has earned a headline of his own after he came to the aid of a woman last week while delivering papers on his route.

On April 12, Alvarez was delivering papers in a neighborhood near GVR’s Desert Hills Center. It was 2:45 a.m. and he was in the rhythm of his routine: His radio was on and the car was slowly making its way down a residential street.

And that’s when a sound reached his ears.

He stopped and determined the voice was coming from a nearby dark carport. Though he’d usually be wary of stepping out of his car in the dead of night to explore a stranger’s property, he followed the repeated cries for help.

There he found an 89-year-old woman on the ground. She had gone for a late night walk, but had left her walker inside her house. On her return home she had fallen in the carport and had been there since. That was four hours before Alvarez found her.

He quickly called 911. Alvarez didn’t try to move her, knowing that could do more damage depending on her injuries. She seemed coherent and alert, so, after assuring her that she was not bleeding, he did the only thing he could – her gave her his coat to protect her from the cool night air.

He didn’t have long to wait; the Green Valley Fire District responded from nearby Station 152, and the woman was transported to Green Valley Hospital around 3:15 a.m. Marilee Wright, a neighbor, said Monday that the woman was still in the hospital and Wright had heard from the woman’s daughter that she had undergone surgery for a fractured hip. Wright said she and other neighbors had not heard anything that night.

As for Alvarez, his part was over once the ambulance arrived. Once he was given his coat back and went on to finish his three routes. He didn’t follow up with how the woman was because he said it wasn’t his place as he was neither friend nor family member. But the encounter did stay with him, and he said he felt “lighter” afterward.

“I was running late that night, but after that I was feeling alright; I had done good,” he said.

He often sees law enforcement or ambulances out doing their job during his early morning routes, but Alvarez said finding a woman in need was a first in his decade of delivering papers – and that’s not a bad thing.

“I don’t want to find another one,” he said.