Firefighter Not Alone in Battle Against Cance 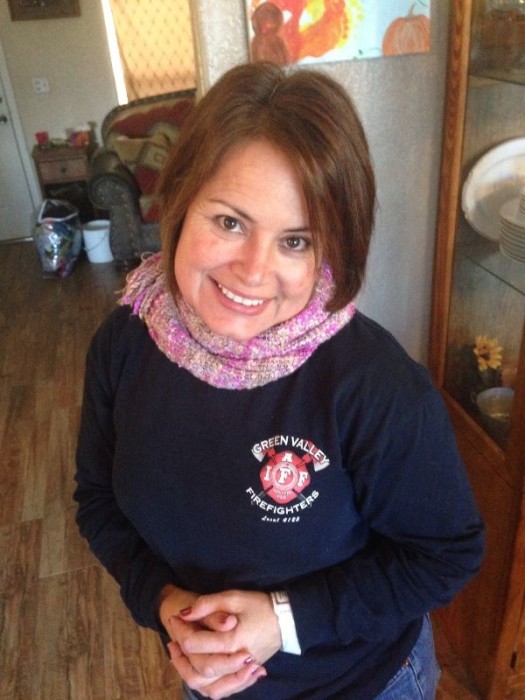 Green Valley Fire District firefighter Annette Poole-Kelley is used to helping people. But for now she has to get used to being the one helped.

Poole-Kelley, 49, was diagnosed last fall with stage 4, aggressive non-Hodgkin’s lymphoma, which has spread past her lymph nodes into her pancreas. She’s getting through it one day at a time, and with a lot of support.

“I felt something was not quite right, even when I was helping to fight the North Star fire in Washington state last summer, but I thought that it was just the stress and exhaustion of firefighting,” she said. “I got concerned when I later felt a lump or something swollen near my jaw and got it checked out.”
The doctors initially found nothing, and “I thought it was over. The bad news came later when another doctor performed a biopsy.”

Poole-Kelley is on medical leave from the GVFD, where she works as a firefighter/EMT, and has been encouraged by firefighters from across Southern Arizona.

“The support that I have had and the phone calls and offers of help have been so overwhelming,” she said. “I’m the one whose job is helping people and it’s been very humbling to know that others are so giving and so good. I’m blessed, and my faith in God has been enhanced with the love from others.”

On the day she had surgery to have a cancerous growth removed from her neck, the hospital waiting room was packed with firefighters, said her daughter, Rachel Swanson.

“It was amazing to see the room overflowing with firefighters from all over and who were all there to support my mom,” Swanson said. “Crews of firefighters took turns bringing us meals and baskets of food while we waited for the results of her operation. This has been very hard on my mom and the family but she trusts in God, and the firefighters, which she also calls ‘family,’ have been just amazing.”

“Annette’s openness about her illness and her desire to educate others is a big benefit to our organization,” he said. Wunder said he expects her to be “back on the truck soon.”

Her most recent blood test indicated that chemo treatments are “working for now,” she said.

“Even after the good news, my doctor had to laugh with me because I complained that my jeans were getting tight and I was gaining weight,” she said. “She said weight gain was better than weight loss, especially in patients getting cancer treatment, and we laughed again thinking about how silly it was to worry about if my pants fit or not. I blame it on my ‘chemo’ brain.”

Destined for the job

Poole-Kelley, who graduated from Sahuarita High School in 1984, began her firefighting career in 2008 with the Sonoita-Elgin Fire District, working five years there before taking a job with the GVFD in May 2013.

“I had been through a divorce and my two daughters were grown and off on their own when I realized that I could be doing something I enjoy and something that would help others,” she said. “I always enjoyed volunteer work and I would volunteer doing odd jobs for the fire department in Sonoita, but I wanted to learn something new and do even more, and that’s when someone suggested firefighting.”

Poole-Kelley recalled a childhood conversation with a friend while growing up in Green Valley.

“I remember sitting on a swing on what was the new Continental School campus at the top of Whitehouse Canyon Road, and Alan Karnas was on another swing next to me,” she said. “We saw a yellow firetruck and Alan turned to me and told me that one day I would be a firefighter and I remember laughing. I wanted to be a veterinarian and get married and be a mother. Little did we both know that we both would be firefighters many years later.”

Karnas is former fire chief for the Helmet Peak Fire Department and now serves as the department’s adviser.

“Firefighters are a brotherhood – a family of men and women who are there for each other and now they are there for me,” Poole-Kelley said. “I’m getting offers of food and rides to doctors’ appointments. Someone even moved hay for my daughter for her goats.”

While going through treatment, Kelley is staying with her daughter in Green Valley.

“I can’t begin to thank my sister and my two daughters for their help and prayers,” she said. “Along with my family of firefighters, many of them who shaved their heads and supporting me losing my hair, I can trust my life in my Christian beliefs and follow whatever the Lord has planned for me –that’s to go back to work and be a firefighter.”