Fire victim: Within five minutes everything was gone 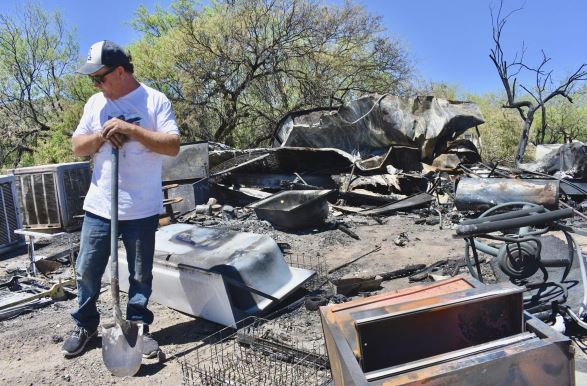 Ashley Brown was moments from stepping into the shower Saturday when she heard her mom.

“She was screaming, ‘The house is on fire, get the baby and get out!” Brown recalled Tuesday. “I ran out into the hallway, saw the flames and I turned and grabbed Maddi.”

With her mom on her heels, Brown, 27, ran outside, clutching 4-year-old Maddison to her chest.

That’s when she realized her dad wasn’t with them and flames were swiftly engulfing their single-wide mobile home west of Sahuarita.

“He was behind us at one point and then he wasn’t, so I was really scared,” she said.

Moments later, her dad came running outside, barefoot. He’d stayed behind to try to extinguish the flames and grab his car keys.

The next several minutes were chaos. Brown called 911 as her mom ran down the street, flagging down a passersby. Her dad tried desperately to move two small propane tanks away from the house. Within a minute or two, family and friends arrived en masse.

Brown and her parents live on West McGee Ranch Road, and she says just about everyone in the neighborhood is related by blood or marriage. A relative took Maddison home and others began shoveling dirt, hoping to stop the fire from spreading to nearby brush and another mobile home. Others sprayed water from a truck owned by the nearby Sierrita Mining and Ranching Company.

“It’s just so far out there,” she said Tuesday, sitting outside at her grandparents’ home in Sahuarita. “Within five or six minutes, everything was gone.”

That includes antique tea sets handed down through the generations she used with her late grandmother, family photos, Maddison’s favorite blankie, and her own paint supplies.

Brown’s father, James Harris, 51, had lived in the home since he was 17. He also lost his work truck and several vehicles he was restoring. The Lincoln Continental he bought last year might be salvageable, but they’re not sure yet.

On Tuesday, as Harris sifted through the ashes, he said he’d been playing a board game with Maddison when he was alerted to the fire. He said his young granddaughter will be a huge help getting him through the tough times in the days to come.

The family didn’t have insurance, but Brown said they are feeling incredibly lucky. Her father suffered burns to his feet and was taken to the hospital to be checked for smoke inhalation; he came home within a couple of hours.

“We got out. We’re safe,” Brown said. “Everything else are just things.”

GVFD spokesman L.T. Pratt said the cause of the fire is undetermined and may never be determined given the extent of the damage. Brown said her father suspects an electrical issue. He’s slowly been working on the home’s electrical system but hadn’t yet gotten to the kitchen wall where her mother, Carrie, first spotted the flames.

Had the fire started just 15 minutes later, Brown said her mother, who is in poor health, would have been home alone and possibly napping. She, her father and Maddison had planned to head to a movie theater that afternoon.

Instead of thinking about the what-ifs, Brown is focusing on the outpouring of generosity from the community. They’ve been given clothing, shoes and toiletries. An uncle has loaned a truck to her father and other family members have opened their doors to them.

“The community has been so amazing. We want to thank everyone — family and friends, the community and the fire department,” Brown said. “It’s been overwhelming, but in a good way.”

They hope to place a new home on the same land, Brown said. Maddison seems to be handling the situation fine, she added.

On Tuesday morning, she was running around her great-grandmother’s yard, where there’s a swing set and other toys to occupy her.