Crews from several agencies are battling a small brush fire in the Santa Rita Mountains between Madera and Box canyons.

The 10-acre fire, detected about 10:30 a.m. Monday, was fueled by low humidity, higher than normal temperatures, dry fuels and strong gusty winds, according to the Green Valley Fire District.

No structures are threatened. The fire is in the general area of last year’s Sawmill Fire, and is visible from Green Valley and Sahuarita. 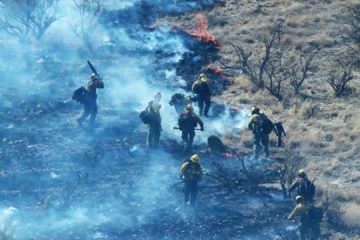 Firefighters from Tubac, Sierra Vista, State Forestry and the U.S. Forest Service responded to the initial attack on the blaze. An aircraft working other wildfires in the south was requested to assist. Cause of the fire has not been determined; wind gusts reached to 25 mph in the area.

Box Canyon Road from Madera Canyon Road to State Route 83 was closed for a time but later reopened.