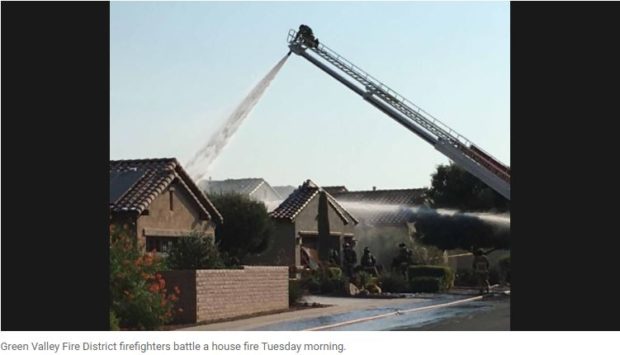 A house fire that was extinguished Monday in Quail Creek reignited Tuesday morning, destroying what remained of the home.

Firefighters responded Monday to a fire that sent flames throughout the attic of the home in the 1900 block of North Laguna Oaks Drive. The owners were out of town and nobody was injured, according to a Green Valley Fire District spokesman.

Much of the contents of the home was saved Monday because the fire burned primarily in the attic and little heat was in the living area, according to the GVFD.

Firefighters remained on the scene for several hours and returned about 9 p.m. Monday to check for hot spots. They said a visual check and thermal imaging showed no heat at the location.

Tuesday morning, a retired fire chief happened by the home and told GVFD he  saw nothing a 6:45 a.m., including smoke, smell or flames.  At 7:22 a.m., a 911 call reported a fully involved house fire at the residence.

The home is a total loss, and investigators are trying to determine a cause of the fires, according to GVFD.  An investigator has been in touch with the home-owners.

The fire was about a block from a home where a fire killed a woman in October.