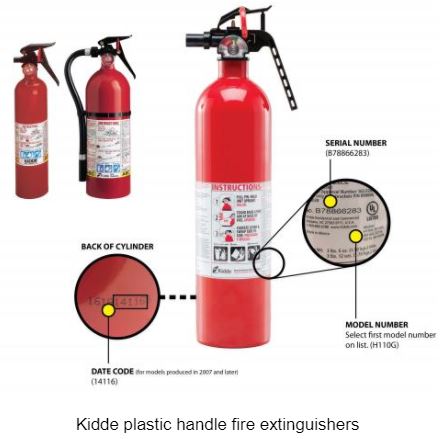 A recall of about 40 million fire extinguishers last week has prompted residents to call the Green Valley Fire District, but firefighters do not have the ability to test, fix or refill extinguishers.

“We ask the public to follow the instructions provided by Kidde if they have one of the recalled items,” said L.T. Pratt, GVFD community outreach coordinator.  “We also remind folks to check their extinguishers regularly to make sure they will work properly if they are ever needed.”

Last week, the U.S. Consumer Product Safety Commission issued a recall of the 134 models of push-button and plastic-handled extinguishers made by the North Carolina-based company Kidde.  The extinguishers were made between 1973 and August 15 and sold in the U.S. and Canada.

The government says the extinguishers can become clogged and fail to spray when needed.  Also, the nozzle can come off with enough force to pose an injury hazard.

In 2014, someone died when emergency responders could not get the recalled Kidde fire extinguishers to work following a car crash.

There have been 391 reports of failed or limited activation or nozzle detachment, including the fatality, 16 injuries, including smoke inhalation and minor burns, and approximately 91 reports of property damage.

The fire extinguishers were sold in stores and on-line nationwide and with commercial trucks, recreational vehicles, personal watercraft and boats.