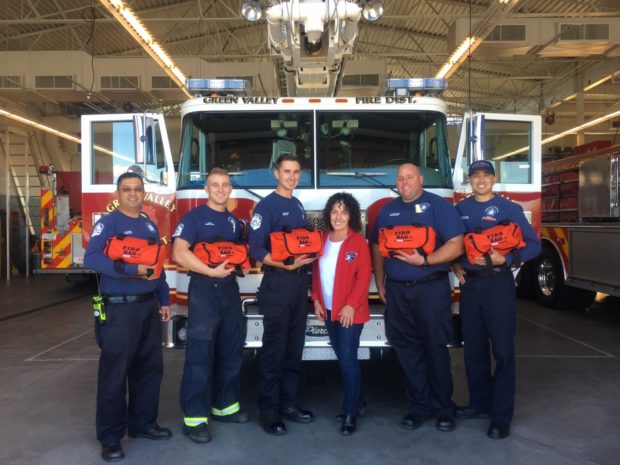 Sure, your Yorkie is as cute as a button the way she snuggles and begs for treats, but what happens when you’ve fallen in the tub and your baby won’t let the paramedics get anywhere near you?

The Green Valley Fire District now has just the right tools to handle that situation.  The Fetch Foundation, a non-profit group based in Cave Creek, AZ., recently donated a Fido Bag to each of the district’s five fire stations.

It comes with an assortment of items that will come in handy not only for first-responders who are reporting to medical emergencies, but to fires and car wrecks as well, GVFD spokesman L.T. Pratt said.

The Fido Bag contains heavy duty gloves in case first-responders have to remove over protective or injured dogs, different size leashes, an oxygen mask and a portable water bowl. 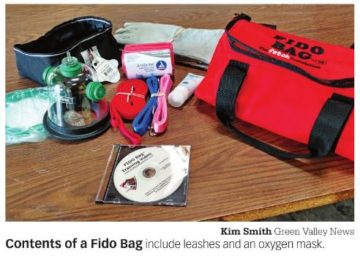 “We’ve had several situations when the fire department had issues with dogs not allowing them into or around the house,” Pratt said.

“The issue, obviously, is the time element,” he said.  “Unless the Pima Animal Care Center has some units down here, it can often take some time before we have someone on scene to remove pets.”

Now that GVFD personnel have the tools they need, they’ll be able to take care of their patients more expediently, Pratt said.

“These bags will be really useful especially in motor vehicle accidents when the pets themselves have been jumbled in the care and fell threatened,” he said.

Just last week Pratt said a Green Valley visitor was in a car wreck with her dog.  GVFD personnel drove her vehicle to the hospital so it was there upon release, but they also took her dog to be examined for injuries.  She was extremely grateful, Pratt said.