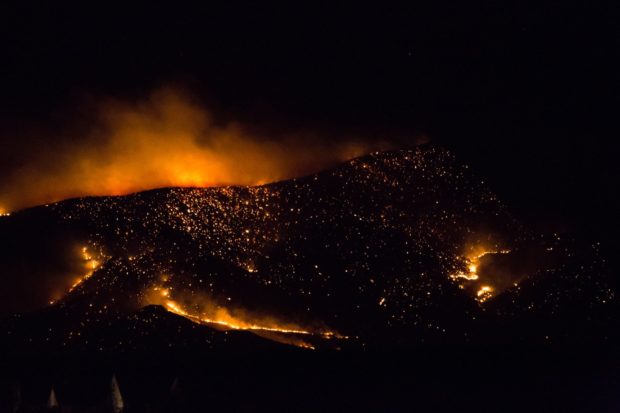 This story has been updated with more information on the sentencing, in bold.

Border Patrol agent Dennis Dickey is facing millions of dollars in restitution after pleading guilty Friday to a misdemeanor charge of causing a fire without a permit, 17 months after he admitted to accidentally starting the 47,000-acre Sawmill Fire east of Green Valley.

Dickey, 37, was initially scheduled to be arraigned Friday on the misdemeanor charge, but he entered a formal agreement in the court of U.S. Magistrate Leslie Bowman.

After watching more than two dozen handcuffed and shackled people being arraigned on alien smuggling and illegal re-entry charges, the U.S. Border Patrol agent acknowledged starting the fire on April 23, 2017. He wore a dress shirt and tie as he stood next to his attorney, Sean Chapman.

Dickey, who arrived at court alone, agreed to five years’ probation and to make a public service announcement with the U.S. Forest Service about the cause of the Sawmill Fire.

He also agreed to pay restitution totaling $8,188,069. The plea agreement stipulates Dickey will immediately pay $100,000 using his retirement fund and $500 per month for 20 years, for a total of $220,000. If Dickey’s income changes significantly, Chapman said his restitution payments would increase. At the end of 20 years, the case goes back to a judge who can then make a decision on future restitution.

In addition to paying various government entities restitution, Dickey will pay $85,000 to Rosemont Copper, where the fire burned east of the Santa Ritas, and $30,000 to Robinson Cattle Company.

Dickey’s sentencing is Oct. 9. He would have been sentenced Friday, but the victims did not receive enough notice of the hearing.

During Friday’s proceedings, Dickey told the court the fire was a “complete accident.”

“I feel absolutely horrible about it,” he said.

According to court documents and testimony, Dickey started the fire by shooting a rifle at a target he constructed in the Coronado National Forest. He immediately reported the fire to authorities. The event was caught on video.

“Inside the target Dickey placed an amount of Tannerite, an explosive substance, intended to detonate when shot by a high-velocity firearm bullet. Dickey fired the shot that exploded the Tannerite target and the resulting explosion caused a fire that spread and resulted in damage to more than 45,000 acres of land, and that explosion was caught on film by a witness.”

Dickey did not have a permit “allowing him to cause timber, trees, slash, brush or grass to burn,” Robinson wrote.

Dickey declined to be interviewed after the hearing. Chapman said Dickey was at a gathering with family and friends, but said he is unsure if rumors about it being a gender-reveal party for a baby are accurate.

He reiterated the fire was a “horrible accident” and said Dickey immediately tried to put it out.

“He ran over to stop it, but within seconds it was 30 feet wide,” Chapman said. He then ran and took his family to safety.

Dickey remains employed by the U.S. Border Patrol, he said. The agency is monitoring what is happening in the courts.

“After he is sentenced, I’m sure some level of discipline will be imposed,” but whether he will be fired is unclear, Chapman said.

The fire began on state land east of Green Valley and went over the Santa Rita Mountains; it was out about a week later with the help of 800 firefighters at a cost of about $8 million. The fire led to the evacuation of hundreds of people and closed SR83 for three days.

Green Valley Fire District Chief Chuck Wunder’s in-laws saw 5,000 acres of ranch land burned and the fire came within 50 yards of their home and 100 feet of their barn.

Much of the charred acreage was grazing land leased from the U.S. Forest Service, the state and the University of Arizona Experimental Range. No structures were lost.