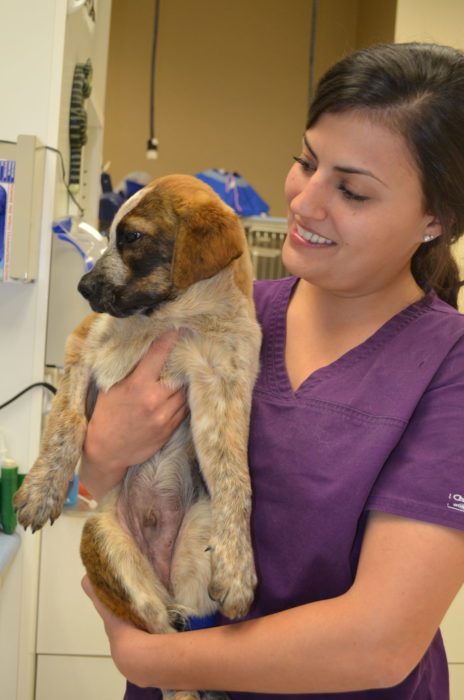 They were everywhere.  His belly, his ears, his mouth.

Three-month-old puppy Eddie was stung by bees so many times Tuesday, veterinarian Dr. Barry Wilkinson said he and his staff stopped counting as they plucked out the stingers.

“We probably pulled close to 200 out of the little guy,” Wilkinson said.

Green Valley Fire District firefighters were called to a home in the 800 block of West Placita Canalito around 11 a.m. by a homeowner who said he couldn’t get to his puppy who was being attacked by a bee swarm, GVFD spokesman L.T. Pratt said.

Firefighters used foam to keep the swarm away while they rescued the puppy from where he had wedged himself in an attempt to get away from the bees.  The puppy was lodged between the house and his dog house.

Once Eddie was free, his owner took him to Duval Animal Hospital.

At just 15 pounds, Wilkinson said the dog was at a much higher risk of dying from the bee stings

than a human would be, particularly if the bees were Africanized.

The doctor said he immediately gave the mixed-breed puppy an antihistamine to counteract the toxin coursing through his body, which could possibly cause his blood pressure to drop dramatically, and even cause death.  He also gave Eddie steroids, pain medications and IV fluids.

According to the University of Arizona and Arizona Department of Environmental Quality, all wild honey bees in Arizona are presumed to be Africanized.

By late Tuesday afternoon, Wilkinson described Eddie’s condition as “stable, but guarded” and said he’d be watched overnight by a technician.

“It could go either way,” Wilkinson said then.

surgery on Friday to repair it and was “resting comfortably” afterward, Newman said.  She said it’s possible Eddie hurt himself when he became wedged during his escape attempt.

Eddie’s recovery is expected to be long.  The Animal League of Green Valley is soliciting funds to pay for Eddie’s care, said Jean Davis, TALGV president.  Donations can be dropped off at TALGV, 1600 Duval Mine Road.