Desert-pest season off to a strong start 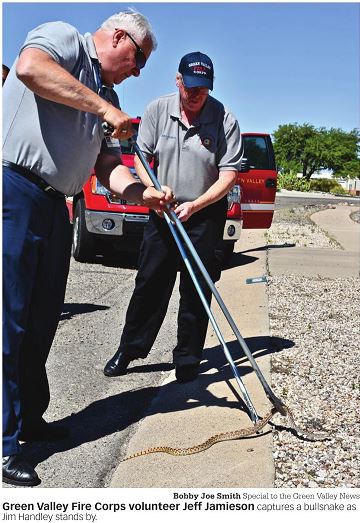 Last year, Jim Handley was shocked when his dog found a small snake in his kitchen right after he moved to Green Valley from Michigan.
This year; Handley’s going out of his way to find the suckers.
Handley is a member of the Green Valley Fire District’s Fire Corps, a group of volunteers who deal with snakes and Gila Monsters, replace smoke alarm batteries, install lock boxes and handle a litany of other chores for the district.
It was the Fire Corps that came and collected the non-venomous bullsnake from Handley’s kitchen. Impressed by their professionalism, Handley decided to sign up.
Right now, Handley and his fellow volunteers are picking up five or six snakes or Gila Monsters a day. It is officially desert pest season, GVFD spokesman L. T. Pratt said.

Last week, a 4-year old Arivaca girl was bitten on the foot by an eight-to-12-inch Western Diamond rattlesnake outside the library. Arivaca Fire Department Chief Larry Austin said.
Her grandmother took her to a local clinic where a doctor washed out her wound. Paramedics then drove the child to The Cow Palace restaurant in Amado, where a medevac helicopter crew flew her to Banner University Medical Center in Tucson.
“The last word I got is that she’s doing fine and she should be released from the hospital today” Austin said Thursday.
Gila Monsters aren’t as worrisome as snakes, but the district gets its fair share of calls to relocate them, Pratt said.
“Unless you poke at them, they’re not going to bother you,” he said.
All GVFD firefighters and more than half of the Fire Corps’ 70 members are trained to deal with snakes and Gila Monsters, Pratt said. (The fire district has updated its website with a variety of educational tips on snakes.)
When people call 911 or the district’s dedicated pest line during the week, whoever is closest will handle the call, Pratt said. On weekends, firefighters will pick up the pests and relocate them.
Pratt has been the fire district’s coordinator for four years and this is the busiest snake season he’s seen.
“They’ve just been coming out of the woodwork, no pun intended,” he said.
SNAKE CALL 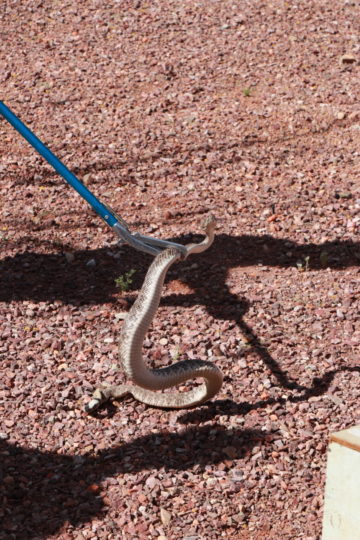 Jeff Jamison, a Fire Corps field training officer; was changing smoke alarm batteries with Handley and newbie Bob Granger last Wednesday when they were summoned to Colonia de los Alamos to deal with a snake.
When they arrived, a homeowner was using a stick to encourage a bull-snake to stay in the street. The 3 ½ foot snake kept heading for the sidewalk.
Within seconds, Jamison had the snake in a box Granger had grabbed from their truck. They planned to release it in the desert about a quarter mile away.
Jamison has caught many a snake in his seven years with the Corps. The largest was a five-foot gopher snake. The most problematic as the bullsnake he spent two hours trying to find. It had crawled up into the coils of a refrigerator in a garage and refused to come out.
“The people were so concerned, we just couldn’t leave,” Jamison said. “We ended up pulling the fridge out and he eventually came out on his own.
Granger said he’s learned one thing about going out on snake calls.
“We don’t have to worry about finding the location. People are usually out in the street waving their arms,” he said.
There are a couple of things people need to know when they encounter snakes and telephone for their removal, the men said: Stay a safe distance from them, and keep track of where they go.
Handley recalled going to a snake call with other volunteers. None could spot the snake because it had crawled into a gas meter surrounded by prickly pear.
“None of us could see it and we asked where it was and the caller kept pointing and saying, “Right there,” he said.
Jamison said he hasn’t had any close calls and he’d like to keep it that way. Plus, knowing where they are saves time.
“The suspense level rises when you get there and you don’t see them anywhere,” he said.