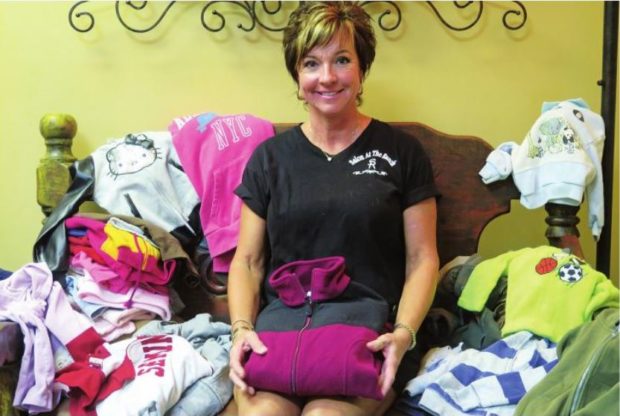 As warm days continue, it may be hard to think ahead a few weeks when chilly mornings and cooler days and nights will be the norm.
Last year, Gayle Creamer, owner of Salon at the Ranch in Amado, organized a jacket drive to help keep kids, teens and adults in need from Sahuarita to Nogales, Ariz. Warm when chilly days arrive.
The outpouring of generosity brought in 1,105 jackets, distributed at the Community Food bank in Amado.
As kids grow, so does their need for a different size jacket and Creamer is asking for another round of new and gently worn jackets, hoodies and gloves.
Last year’s giveaway started out slow, she said, but when word in the community got out that jackets were being given out at the Amado Food bank, those in need arrived in droves.
“Parents went out into the community and spread the word and brought other people back,” Creamer said, adding she hopes the lineup will be long when the doors open at 9 a.m. Oct. 20.
Who’s eligible? “Anyone who wants to be warm,” Creamer said.
For the coming jacket give-away, she received a $1000 grant from tuba rotary for jackets, gloves and mittens.
Helping Creamer in the 2017 jacket drive were the Tubac and Green Valley Fire Districts, the Green Valley Rotary club, the Center for Spiritual Living, Ooh La La Designer Consignor and several church groups. For the coming jacket drive, the Animal League of Green Valley and White Elephant are also getting involved and donating jackets.
Members of the Green Valley Rotary club are helping with pickups and organizing. Jackets and monetary donations may be dropped at the fire station in Tubac, any fire station in Green Valley and the Food Banks in Amado and in Green Valley.
Creamer said most donations come from Sahuarita and Green Valley for children, teens and adults in Amado, Arivaca, Tubac, Rio Rico and Nogales, Ariz.
“We’re very low on kids’ jackets from toddlers to age 12,” she said, recalling a memorable moment last year.
A young boy tried on a light-weight jacket that fit him well, but he kept eyeing a green jacket that was a heavier weight. Creamer had him try it on and could see he loved it.
“When I told him he could have it he said, ‘You mean I can have two?’
“Weeks later I saw him out with his mom and he was wearing the jacket. It made me feel so good.”
How to Help:
Families with children and teens who need winter jackets and gloves may come to the Amado community Food bank at 28720 S Nogales Highway starting at 9 a.m., October 20. Jacket distribution will end at noon.
To donate cash, or for more information, call Gayle Creamer at 398-9831.