Car hits hydrant, slowly sinks before crane pulls it out 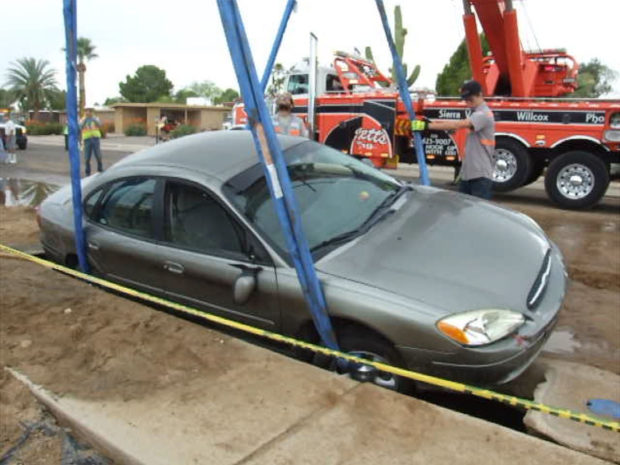 A car struck a fire hydrant in Green Valley on Friday, driving 1,000 gallons of water a minute into the earth, creating a mud bog, flooding the street and opening a hole that swallowed part of the vehicle.

The driver, an elderly man, was not injured in the 11:30 a.m. crash at San Ignacio and Rio Altar in northern Green Valley.

The crash sent water gushing into the street, two garages and into the carport of another residence before Community Water Company workers shut it off.

Two of the homes were unoccupied. The resident of a third home was assisted by a Green Valley Fire District crew in removing some of the water from his garage and gather up displaced landscape rocks. It doesn’t appear any water entered homes.

Arturo Gabaldon, president of Community Water, said the hydrant broke off about three and a half feet below where it was designed to. Crews dug a four- to five-foot trench to repair the six-inch pipe. Water shot into the ground after the hydrant became lodged under the vehicle.

“It was a significant amount of water that was lost,” Gabaldon said, adding that the system that closes and isolates water worked well, preventing a much larger loss. He said they wouldn’t know until Monday exactly how much water was lost, but said it was 1,000 gallons a minute. He said some homes in the area lost pressure for a short time.

One tow truck called to move the car was unable to dislodge it, and a second one called in a crane to lift the car off the muddy depression formed as the hole deepened.

Pima County transportation workers then entered the hole about chest-deep with hand shovels to remove the sunken hydrant; a bulldozer and other machinery were also assisting.

Soil was displaced from several of the yards as water still trickled through the area through late afternoon.