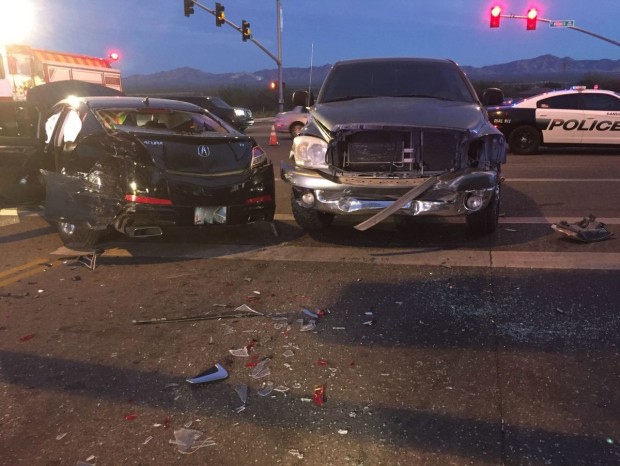 Around 6:15 p.m., the district responded to a three-vehicle crash at Abrego Drive and Duval Mine Road involving a sedan, truck and mid-sized SUV.
A 59-year-old female occupant of the sedan had to be cut out of the SUV using hydraulic spreaders, known as the jaws of life. She was transported to Banner University Medical Center with non-life-threatening injuries, while two female passengers in the SUV, a 14 year old and 68 year old, were transported to the Green Valley Hospital with minor injuries.

The five other people involved in the accident were not injured and decline to be transported. Everyone was wearing a seatbelt, the GVFD said.

Roughly 20 minutes after the crash, and while two fire engines and crews were responding to that incident, the GVFD received multiple 911 calls about a fire on the 1000 block of N. Bessett Avenue.

It took three fire engines and 10 firefighters about 20 minute to bring the fire, located in the house’s garage, under control. The fire, which did roughly $30,000 in damage to the garage, is thought to have been caused by an electrical issue which ignited shop rags that were below an exterior light, the GVFD said.

The fire was contained to the garage and did not spread into the house itself. No one was home at the time. Two dogs that were in the residence at the time were not harmed by the fire, according to the GVFD.