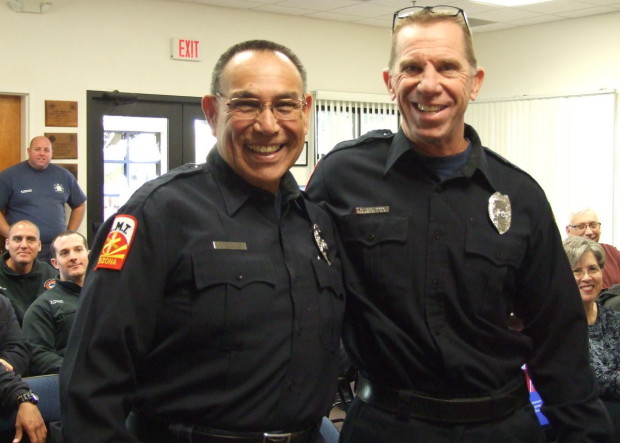 Two of Green Valley Fire District’s most public figures retire this month, one last week, the other Dec. 31.
Both graduated from the same Fire Academy class in 1990, beginning as firefighters and working their way up to posts in GVFD’s Prevention Bureau — Greg Hernandez as an inspector and Mark Stonestreet as deputy fire marshal.

“I was there almost every day,” he recalls. He also investigated fire scenes to determine cause and issue reports to insurers and others.

Occasionally lessons turned to kids playing with matches, recalled Simon Davis, who worked alongside the pair for years before retiring in 2014. Early intervention was key, he said.

“(Mark) is a rock and exactly the type of person you want on your crew,” said former GVFD captain Tom Louis.

Hernandez, who joined GVFD in 2001 after stints in Nogales, Elephant Head and elsewhere, was known to businesses in Green Valley and in GVFD’s Sahuarita portion, visiting them yearly for structural inspections, trading the flame-shaped wig often worn in the classroom for a his checklist clipboard.

“They always went in with the right attitude,” Davis said of the pair. Everyone eventually complied with whatever fixes were called for, he said. “We never had a problem.”

But it’s likely Hernandez’s role as Santa at staff kids’ parties that’ll be most remembered. He took it on 20 years ago after the last Santa retired.

“We were always coming up with ways for Santa to arrive — sports cars, motorcycle, helicopter, with dogs. “One time we dropped him through the roof,” Davis said. Kids in the classroom loved him, too.

“He made it fun,” Davis said. His laugh was infectious, added Louis.

Hernandez can’t wait to move to Naples, Fla., where he relishes spending time with his daughter’s family, including two young grandsons, he said. He’ll be back to visit; he has many relatives in Phoenix.

“I am excited at starting a new chapter, but it’s also surreal knowing that I will be leaving my Green Valley family,” he said.

GVFD Division Chief Joey Kosiorowski called the pair’s contributions to the Green Valley/Sahuarita communities “invaluable,” and said they were vital to the district’s success. They’ve been acquainting their replacements with the district — Dennis Stiegleiter and Roger Thompson, both longtimers in the area.