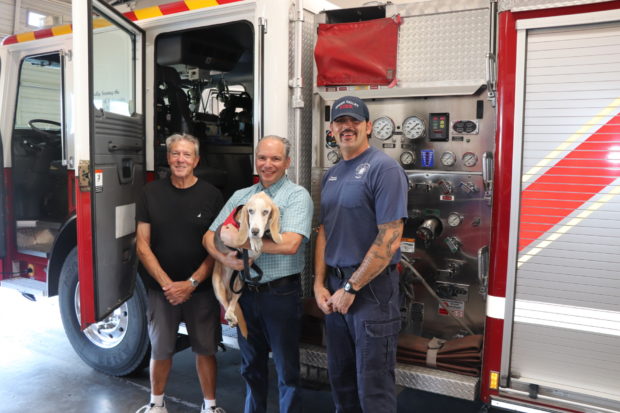 It happened just like in the movies, Matthew Miller said.

On Sunday morning, Miller said his 82-year-old father, Mark, was walking his 11-year-old basset hound, Bailey, when he fell down an embankment near his home.

“Bailey ran up the hill and down the road barking and barking and a neighbor followed him. It was a ‘Lassie Come Home’ kind of thing,” Miller said Friday.

GVFD spokesman L.T. Pratt said firefighters helped Miller up the 15-foot slope in the 3000 block of South Via del Tirol, and took him to Banner University Medical Center in Tucson.

During a brief telephone interview Friday from UMC, Mark Miller said he was feeling “a lot better now.”

Matthew Miller said that after hearing about the accident, he drove from his home in Santa Fe, New Mexico, to Tucson.

He said his father, who moved to Green Valley from New York City 18 years ago, fractured his skull and some ribs in the fall. He was admitted to ICU, but after showing some improvement was moved into the trauma unit.

His father needs to regain some motor control, but he used to be a marathon runner and hopefully that will aid in his recovery, he said.

Bailey is a trained and registered therapy dog and his father used to take her to nursing homes and memory care centers to visit, Matthew Miller said.

“Ironically, now she’s at a hospital visiting him,” he said. “She’s even got her vest on.”

Although his father has someone call him every day, there’s no telling how long it would have been for someone to realize he was missing and to track him through his iPhone and Apple watch, he said.

“Bailey saved his life. Time was of the essence because he was bleeding profusely,” Matthew Miller said.

The Santa Fe resident laughed when asked if Bailey will be getting steaks for life from now on.