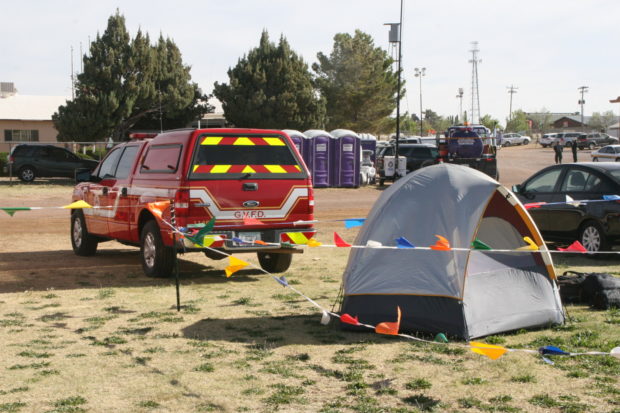 Over the past two months, L.T. Pratt has spent 36 nights in a two-person tent — and it wasn’t because he wanted to enjoy the great outdoors.

Pratt is on an elite team of first-responders called into service when there is an especially bad event, whether a wildland fire, natural disaster or even a terrorist attack.

Pratt, the community outreach coordinator for the Green Valley Fire District, is on a Type I Incident Management Team, one of just 16 nationally. They are the most highly trained and respond to the biggest and most complex incidents.

Since April, Pratt has been called into service for three wildland fires — the Sawmill Fire near Green Valley, the Pinal Fire near Globe and the Highline Fire near Payson.

“This brush fire season got off to an incredibly accelerated start,” Pratt said. “In the seven years I’ve been involved with the incident management team, I’ve never seen it take off so fast or so dangerously.”

Each of the fires Pratt responded to met the requirements for a Type I Incident Management Team: more than 500 firefighters on scene, or because the fire was in extra-rough terrain, threatened homes, natural resources, endangered species or even observatories.

“It takes a lot of coordination to keep that many people going in the same direction,” Pratt said.

To illustrate just how dangerous this fire season is, Pratt points out that there are currently two Type I teams assigned to the Goodwin Fire outside Prescott. Normally fires require only one.

As of Thursday, there were 24 fires burning in Arizona and three required Type I teams. Two of those teams are from out of state because Pratt’s team and the other Southwest Region team were committed to other fires when new fires sprang up.

Pratt said he is cringing thinking about the fires that may be caused with the Fourth of July holiday.

“My gosh, people. Be careful with your fireworks,” Pratt said. “If you’re going to be silly enough to use them, don’t set fire to your neighbor’s house or the forest.”

Each Type I team has at least 45 members with specific roles. Pratt, who spent 30 years with the Pima County Sheriff’s Department, works in the planning section.

“I’m personally responsible for all of the documentation for the fires I’m assigned to,” Pratt said.

He keeps track of personnel time, equipment orders, supply invoices, replacement orders, changes on personnel, communications, to name a few. In addition, Pratt is also responsible for creating every day’s incident action plan so it can be disseminated to the troops. The plans detail what the objectives of the day are, who’s in charge, weather predictions, a fire behavioral analysis, air operation details, radio frequencies and what safety concerns might exist, whether it’s bears in the area, poison ivy or dehydration, Pratt said.

“Whether you are managing a small incident such as a house fire, or a much larger incident, such as our recent Sawmill Fire, the model is exactly the same.  It is simply scaled up or down as needed,” Wunder said.  “(He helps them) gain a better understanding of how to upscale the incident management model, and a better perspective on the importance of their role within the model.”

Pratt has been a Type I member for seven years. Every team is assigned to a geographic area, but must be ready to deploy to anywhere in the United States should the need arise, he said.

He always carries a “go bag” with him containing two weeks of clothes, personal necessities, a sleeping bag and a sleeping pad, Pratt said.

“We can’t be dependent or a burden on the place we go, so we’ve got to be self-sustaining,” Pratt said.

Team members commit to 14-day shifts. Arizona and New Mexico have two Type I teams assigned to them and Pratt’s team and the other team are on call for two weeks at a time.

If they’re lucky, the teams can use schools and wi-fi to do their work and pitch tents on athletic fields, Pratt said. Other times, they perform their roles in tents using generators for electricity. 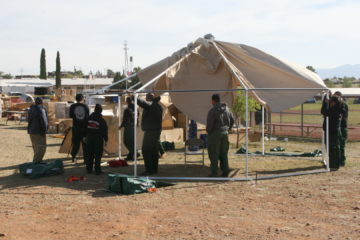 During the Sawmill Fire, Pratt stayed in a tent at the Pima County Fairgrounds and worked out of a county building.

In either case, Pratt said he’s able to perform many of his GVFD duties, like updating the district’s website and social media pages, from afar.

For years, the district and the other agencies have determined in advance how much the district will be reimbursed for the salaries every dispatcher and firefighter. They also decide how much each tender or fire engine sent out to assist during an emergency will cost each agency, such as the U.S. Forest Service, Pratt said.

Replacement, maintenance and fuel costs are taken into consideration when determining the price tag, along with how much it will cost the district in overtime to cover for the missing firefighters, Pratt said. 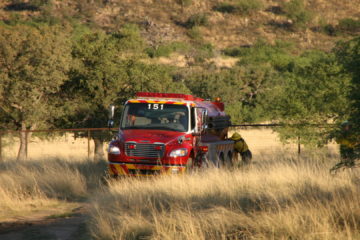 The reimbursements will be used for maintenance on vehicles and overtime costs covering shifts of those, like Pratt, who are away.