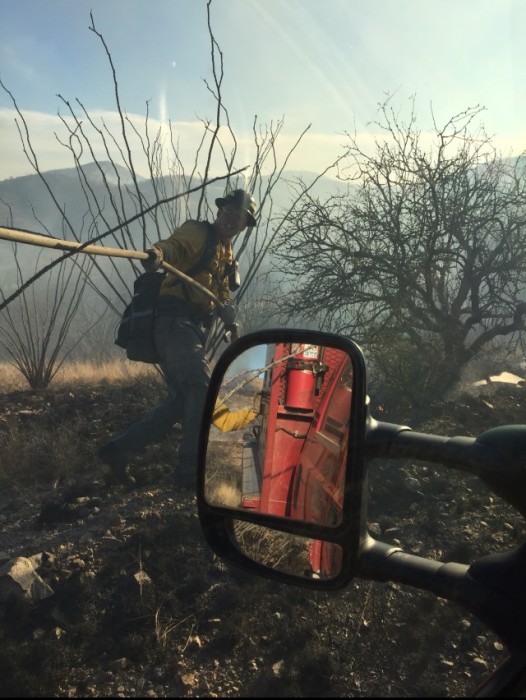 A fire that may have been sparked during a Davis-Monthan Air Force Base training mission was 75 percent contained as of about 5:30 p.m. Tuesday, and shrank to 1,022 acres from 1,400 acres.

A ranch house and other buildings were threatened at one point, but structure protection and clearing by crews were effective and the site is out of danger, said Carrie Dennett, of Arizona State Forestry, which is overseeing the firefight and investigating the cause. Pima County Sheriff’s Office also responded initially, but detectives did not deploy, said Lt. Jeff Palmer of the department’s Green Valley substation.

Daytime hours Tuesday were spent monitoring the progress of what is called the Amigo Wash Fire, mopping up and watching for hot spots in the site’s interior, Dennett said. The absence of winds that fed the fire Monday helped in containment efforts Tuesday, which largely involved surrounding the fire with hand and road lines and creek beds, she said.
Investigators were still on the scene at nightfall Tuesday. About 110 firefighters from several agencies were on duty in the area through Tuesday; typically there’d be an engine or two yet patrolling where possible, but Dennett hadn’t heard whether that was the case Tuesday evening. Cell phone service is unavailable from portions of the site.

According to GVFD, the fire was reported near milepost 3 about two miles northeast of Arivaca and “windy conditions helped this fire spread quickly and crews had to prioritize protection of several structures before additional resources arrived.”

Davis-Monthan issued a press release stating the fire was sparked about 12:30 p.m. Monday by search and rescue training activity, but that is not listed as the official cause.

“We’re not connecting the dots until we hear from the investigators,” Dennett said.

As of about 6 p.m. Tuesday, Green Valley crews were planning to deploy to the area again today, Wunder said.