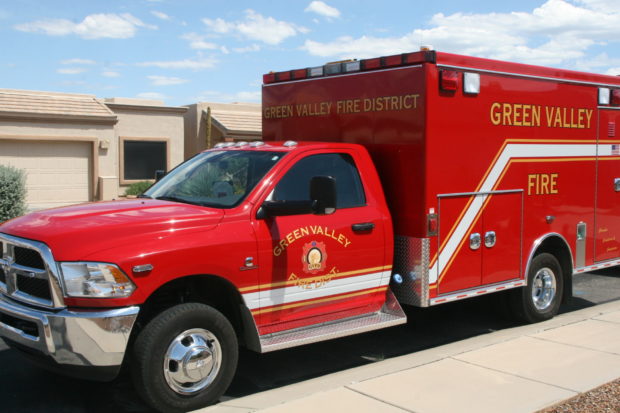 More than 1,300 patients were taken to area hospitals by the Green Valley Fire District last year, its first year in the ambulance business.

After clearing the Arizona Department of Health Services and Medicare, two ambulances staffed by GVFD began responding to emergency calls from Stations 151 and 153 on Nov. 20, 2017.

The ambulance at Station 151 on La Cañada Drive operates full time; Station 153 on Continental Road is put into service during high demand and when the other ambulances are tied up.

When the ambulance at Station 153 isn’t in service, it acts as a rescue engine and provides back-up to the fire engine housed at the station, Wunder said. As a result, there will be times when residents will see both a GVFD and AMR ambulance at the same scene. AMR, formerly Southwest Ambulance, is owned by Rural Metro Fire.

Whether patients take a ride in an AMR ambulance or a GVFD ambulance depends on which is closer, he said. Which hospital it goes to is up to the patient.

Of the 1,335 patients transported in 2018, 50 percent chose Santa Cruz Valley Regional Hospital and 27 percent chose St. Mary’s Hospital in Tucson, Wunder said. The remainder went to other hospitals in Tucson.

AMR statistics weren’t immediately available, according to a spokesman.

Wunder said GVFD started an ambulance service because it wanted to ensure there were enough resources to serve the community. He’s satisfied with the number of ambulances the district currently has. The contract with AMR is for six years; GVFD would have to enter discussions with AMR if it wanted to add more.

The transition has been smooth, Wunder said.

“I’m pleased with how well it’s gone in a short amount of time,” he said.

The fire district and AMR charge the same rates, which are set by the state. Patients requiring advanced life support are billed a base rate of $1,350.10, while patients requiring basic life support are billed $1220.99. They must also pay for supplies and mileage, which is $11.26 per mile. Most trips are taken care of by Medicare and secondary insurance, Wunder said.