After several years, ADOT joins in to control buffelgrass 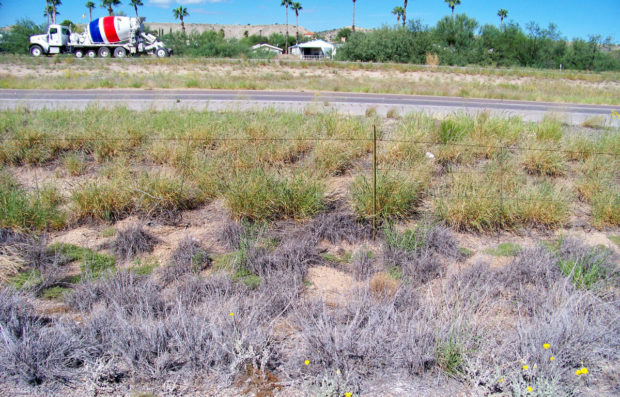 With everyone, including the state, now pitching in this summer to fight buffelgrass along the Interstate 19 corridor, the Green Valley and Sahuarita area could have the pesky plant nearly licked.

That is, until the highly flammable grass eventually pops up again, which it always does. But in the meantime, a united front could have 95 percent of the problem solved this summer, Green Valley Council President Don Weaver told council representatives in May. Currently, about 75 percent of buffelgrass near Green Valley structures has been eliminated.

An organized attack involving GVC, Pima County, Sahuarita and others is entering its third year, and it’s looking like the assault team includes every available resource.

That hasn’t always been the case. Last year Tucson-region officials tried unsuccessfully to get the Arizona Department of Transportation to treat along I-19 in order to prevent wildfires from harming people and property.

Repeated attempts to get ADOT to treat buffelgrass in medians, shoulders and adjacent frontage roads — where the grass in some areas is only a few hundred feet from housing – was a losing battle. Months of talks between GVC and ADOT failed to get the state agency to spray the grass or manually remove it.

If ADOT conducted any treatment, Green Valley leaders were unaware of it. Requests to allow GVC to oversee herbicidal spraying along the east and west I-19 frontage roads were met with resistance.

Tony Strungis, chair of GVC’s buffelgrass effort, said Tuesday he didn’t know that ADOT addressed buffelgrass last year despite an offer by the GVC Foundation to provide some of its community grant money, but crews did mechanically trim areas along I-19 on and off ramps. However, cutting is less effective than spraying or removing the buffelgrass, as it reseeds easily.

However, this monsoon season, ADOT said it’s on board with a general plan to control buffelgrass, to be refined as the rains arrive, according to agency spokesman Tom Herrmann. It will spray when the plant starts to turn green, when the herbicide is most effective. That’s likely in July, although the exact timing is up to Mother Nature.

“The area in focus will be between Continental and Duval Mine roads in the Green Valley area, but that area could expand,” Herrmann said. “We’ll be addressing the buffelgrass wherever it’s an issue – median, shoulders, frontage roads.”

GVC isn’t sure what transpired to get ADOT back in the picture, but it’s glad to have it part of the solution instead of a problem, Strungis said. He recalled a March meeting in Tucson involving ADOT, at which other attendees encouraged the agency to spray.

At that meeting, John Scheuring of the Arizona Native Plant Society’s Tucson chapter, spoke on the importance of treating the I-19 corridor.

Mikel Shilling, chair of Green Valley Fire District’s board, who authored an informal four-page report on buffelgrass, said it is believed regrowth of untreated patches on that stretch of road contributes to new clumps appearing.

In the the third year of targeted effort, $65,000 in grant money from Freeport-McMoRan to help eradicate buffelgrass is running out.

Currently GVC is working with the county on a 50-50 cost split, retaining herbicide-licensed contractor AAA Landscaping company, to spray arroyos and other common areas.

According to experts who examined Green Valley areas earlier this year for buffelgrass “hot spots,” recurrence is minimal, thanks to previous spraying efforts, Strungis said.

“With our last bit of money, we’ll go out and attack it again this year,” he said. “It doesn’t mean it will never come back — and it will, it’s … voracious the way it spreads — but it’s pretty much under control.”

Key will be vigilance by homeowner associations working with their landscapers to keep it at bay, he said. GVC members received buffelgrass training from SABCC and can offer advice on how to address it, Strungis said.

Since January, there’s already been three wildfires along Green Valley’s stretch of I-19, said GVFD Battalion Chief William Rowe, one of which scarred a portion of northbound roadside just south of Duval Mine Road.

“The biggest thing is, once (buffelgrass) dries out, it’s a flashy fuel (and) carries fire quickly (especially) when it gets established in a continuous bed. Fire doesn’t kill it, just burns off the top of it,” Rowe said.

“It’s a challenge if you don’t get the roots. Even the mines have addressed the issue; anywhere soil gets disturbed can seed quickly.”

Although the fire district doesn’t have its own active removal program, its Community Services division will send someone to talk with HOAs to raise awareness about buffelgrass with its “defensible space” program, Rowe said.

With ADOT contributing to abatement it could mean a significant reduction to the community’s buffelgrass threat.

“We recognize this as a serious issue and we’ll be approaching this effort with that in mind,” Herrmann said.