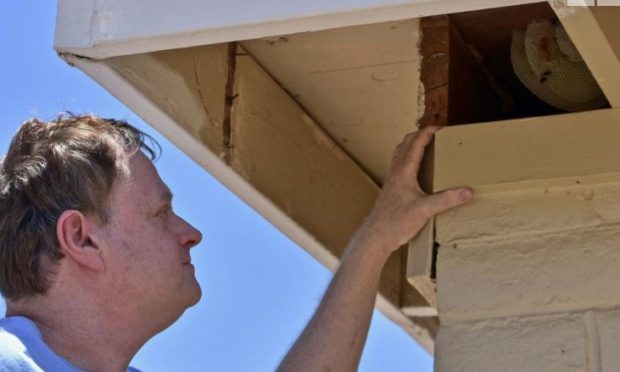 After spending several months riding his motorcycle through South America, the last thing Dan Carr wanted to deal with when he got home on June 1 was visitors. But he didn’t have a choice.

“I was outside cleaning up weeds and I heard a buzzing,” said Carr, who lives in Amado. “I looked up and I saw some bees going into this small little crack.”

It turns out that while he was gone, a swarm of bees found a crack under the eaves of his house in the Lakewood neighborhood and moved in.

Being a do-it-yourself kind of guy, Carr researched YouTube for ways to get rid of bees before deciding he didn’t want to risk being attacked. He called Greg Williams of Desert Swarm Africanized Bee Removal, who shot poison into the cavity to kill them a couple of days later.

“I was in the room just below the hive and I could hear the swarm get very loud and angry during the process,” Carr said.

Carr plans to don rubber gloves to get rid of the 10- to 12-inch honeycomb they left behind. A few bees kept returning to the hive and he had to wait for them to leave the area.

Williams, a wildlife biologist, has been in the bee business for about seven years. While it’s sometimes possible to remove bees without killing them, he couldn’t at Carr’s house because they were already established inside a structure. And, since all bees are considered Africanized in Arizona, they are aggressive and territorial, he said.

Williams has been all over Southern Arizona this year, and to Amado about a dozen times. Thanks to a lot of fall and winter rain, the desert bloom was especially strong this year.

In good years, bee hives will get so overcrowded, half the bees will look for a new place to live, he said. They like to goto places with one entry/exit point and all they need is a crack a quarter-inch in size.

“I’ve had hundreds of calls,” Williams said. “It amped up in mid-March, and in April we were going like gangbusters.”

“We got off to a pretty dynamic start with a number of bee calls that were pretty serious in nature, especially the one with the dog,” Pratt said. “Now that the temperatures have increased, things have returned to normal.”

On March 11, bees attacked a dog in the backyard of a home in the 600 block of West Calle Torres Blancas. GVFD firefighters lifted her over a wall and rushed her to a vet, but veterinarians were unable to save her. The bees had created a hive inside a block wall. Crews foamed the swarm for more than an hour before it dissipated.

A couple of weeks ago, Williams removed a 225-pound hive; his largest so far was about 600 pounds.

Business has dropped off a bit now, but it’s also become a particularly dangerous time of year, he said.

Bees like to keep their hive temperatures below the mid-90s, and they do so by bringing water back to their hives on their bellies. Using their wings, they turn themselves into miniature evaporative coolers, he said. With the heat rising, they’re going to become grouchier.

“They’re very protective of what they’ve been building and combined with the stress due to the heat they can be provoked quite easily,” Williams said.

Vibrations and sound alone can set them off, he said.

The best thing people can do is to look around their homes once a week for bee activity, he said. Bees sitting on flowers and trees are fine; bees disappearing into cracks, not so good.

“People need to be aware that swarms can happen at anytime and they need to be cautious,” Pratt said. “If they feel threatened they should call 911.”

“I tell people they’re welcome to try to get rid of them on their own, but I don’t recommend it,” Williams said. “I also joke around and tell them, ‘I’m going to be watching the TV tonight to see if you’re on it.'”

“They asked me to stop mowing my lawn because they said the bees were going to get pissed off and attack them,” Carr said.