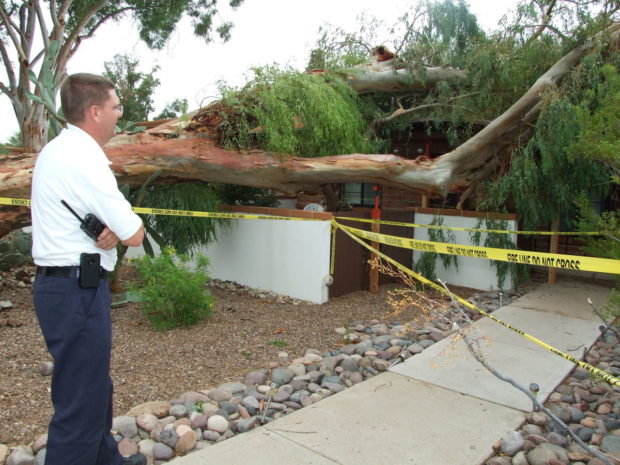 Around 5 p.m. on Saturday afternoon, lightning struck a palm tree in the backyard of a Green Valley home. It was the second palm tree in the past two weeks to be charred during the heavy storms that moved through the area as the monsoon season kicked into gear.

Lightning strikes are just some of the damage the monsoon wreaks on the area as it blows, floods and thunders across Arizona. And, depending on the severity, the season can rack up thousands or millions in cleanup and repair work for governments, businesses and homeowners.

Sheila Bowen, public works director for the Town of Sahuarita, said the average cost over the past three years for cleaning up following monsoon storms has been about $12,000, but individual seasons vary. Last summer, the town spent $4,200 contracting with a street sweeper, and $7,325 on employee overtime; the year before, the street sweeper costs were $10,807, and overtime was $4,592.

Bowen said most of the work is clearing debris out of the road or right-of-way. In the last three years there was no major damage to the town’s infrastructure, though an radio antenna at the wastewater/streets building was knocked over during a storm in 2014, and sometimes there are short-term road closures. The most notable damage over the past few years was to Tucson Electric Power poles, she said.

Joe Barrios, a spokesman for TEP, said the rule of thumb is that every summer around 100 of the utility’s 100,000 power poles will need to be replaced, though the exact number is up to the severity of the monsoon season. Last year, it had to replace 90, and in 2014 it had an especially light year with only 65 going down. However, in 2011 it had to replace 180, and in 2013 TEP had to replace 140. In most cases poles are knocked over by strong gusts of wind, but there are incidents where running water will scour the base until the pole topples, Barrios said.

TEP spends $3 million to $5 million annually fixing damage caused by the summer heat or storms. Those costs include paying employees, materials and other costs, such as lights and generators if repairs are being made at night. There is also a separate $10 million fund for any urgent emergency, he said.

Pima County has an annual monsoon clean-up budget of roughly $200,000, but it cannot separate out what will be spent in Green Valley. Priscilla Cornelio, director of the county’s Department of Transportation, said the area’s costs are probably minimal, as there is usually an occasional tree down or a few streets that need closing.

Danny Johnson, with Danny’s Tree Service of Green Valley, said untrimmed trees contribute to much of the destruction of property in a monsoon.

“Insurance covers a lot of it, but trees also come down on the property and they have to be removed and that can cost you,” he said.

The size of the tree determines the cost to remove it, Johnson said, and it can be more than $300 to have a fallen saguaro taken away.

Johnson has been in the local tree service business for more than three decades, but two years stick out in his memory as “crazy busy” because of monsoon storm damage.

“I remember 1996 and 2012, because of the amount of rain and flooding those years,” he said. “A lot of the damage also has to do with microbursts that can cause very powerful winds that are pretty unpredictable and usually strong.”

Johnson recalled that he and his crew spent more than a month trimming and removing fallen trees in Villas West in Green Valley following a monsoon in July 2012 that took down a large pine in the 52-year-old community and broke branches off several old eucalyptus trees damaging homes and property.

“That was a very bad microburst that year and I estimate that cost to the West Villas insurance company had to be about $140,000 or so,” Johnson said.

Jimmy Moreno, owner of Trinity Roofing Company in Green Valley, said the monsoon season is the busiest time of year for his company. Calls start escalating in March or April in anticipation for the storms and the company can average 10 to 30 calls a day for service during the summer.

The most common is to repair leaks, but another frequent problem is strong storm winds damaging roofs. Depending on the size of the repair, it can cost from $500 into thousands of dollars, Moreno said. And, in years with constant rains, the weather can actually inhibit how quickly Trinity can effect repairs

“There were a few years there when it was ridiculous, we were working weekends and so were the other roofing companies,” he said.

Art Cordova, an insurance agent with State Farm in Sahuarita, said there is an increase in claims – though nothing dramatic – after a heavy monsoon storm. In cases of major damage, when water gets into the home or a tree falls onto the home, that could run anywhere between $600 and $60,000, depending on the severity, he said.

However, the majority of claims they see is for leaking roofs, not so much in the newer Rancho Sahuarita, but the older spots in Sahuarita and Green Valley.

“A lot of times the monsoon is a maintenance tracker,” he said.

Tony Ramani, with Allstate Insurance in Green Valley, says that, by and large, his clients are already keeping on top of their maintenance. Thought the monsoon can do quite a bit of damage – especially if a roof’s shingles are in poor condition – Green Valley has one of the lowest claim rates in the state because homeowners generally take care of their houses.

People also tend to keep simpler, desert-themed yards, meaning less opportunity for damage from uprooted plants or wayward branches. It’s completely different than just up in Tucson where a street with be strewn with trees and branches following a bad storm, Ramani said.

“You can’t stop Mother Nature, but you can prevent certain things from happening to you,” he said.